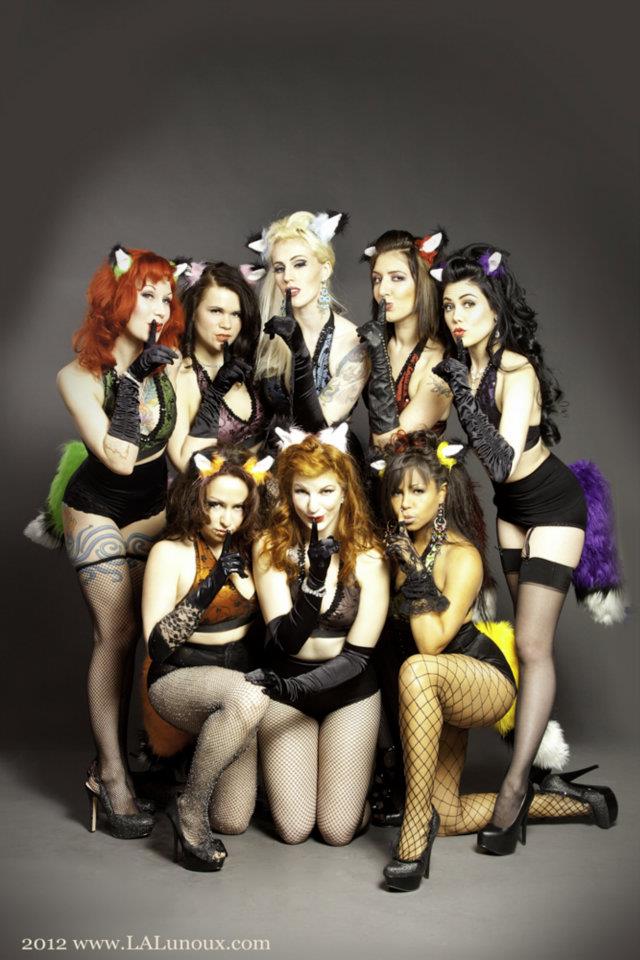 The Frim Fram Foxies have only been together a little over a year but they’re already making waves in the PDX burlesque scene with cleverly themed shows like “suicide burlesque” where the audience picks a song for a Foxie to dance to without cluing her in as to what it is beforehand. Basically a sexier version of suicide karaoke. And on Friday, August 10 they’ll be bringing their 90s themed show, “In Living Colour Burlesque” to the Funhouse Lounge. Pick up your tickets before they’re gone.

While the troupe is relatively new, they are far from being newcomers to the burlesque scene. Tana the Tatooed Lady of Seattle’s legendary Atomic Bombshells and Holly Dai, founder of the Rose City School of Burlesque have been performing on Pacific Northwest stages for years now. That said, they claim to be Portland’s first proper burlesque troupe, with previous organizations, like Rose City Shimmy being more collectives than troupes. We’re incredibly honored that they’ve chosen Brown Paper Tickets to ticket their one-of-a-kind shows and we can’t wait to watch these girls rise to prominence in the Rose City and beyond. With their beauty, talent, pedigree and compelling, original ideas, I think we’re going to be hearing a lot more from the Foxies.

We sat down and chatted with Holly Dai to discuss how the troupe got together, their influences and a little about the Portland scene. Holly even offered up some great advice for troupes that are just getting started.

The Foxies are relative newcomers to the Portland burlesque scene. Can you tell us a little about how you got started? Were any of you in other Portland-based troupes before starting the Foxies?
The Frim Fram Foxies came together as a brain-child of me, Holly Dai, after going to a Seattle based event for burlesque performers called Burlycon. This event and classes inspired me to get together a group of performers who wanted to create a cohesive group dedicated to exposing Portland to spectacular shows. At the time none of the members had been in a previous troupe because there were no other troupes in Portland. There was and still is a collective of independent performers who get together called the Rose City Shimmy, but they were not considering themselves a troupe. As most of the performers selected in the beginnings of the Frim Fram Foxies were either new or students of the Rose City School of Burlesque; there was not many who knew where to go or how to proceed in a group dynamic. Things changed drastically when Tana the Tattooed Lady agreed to help be one of the leaders. Tana has been performing for several years and was once a part of a troupe in Seattle, The Atomic Bombshells. With her experience in group dynamics, the troupe was officially started and auditions were held. Dee Dee Pepper has been another essential aspect to our troupe as she has had experience in theater with stage management. Our first attempt at a show was actually the Labyrinth Ball. Dee Dee helped organize and run the show. It would not have been a success without her. Together me, Tana the Tattooed Lady, and Dee Dee Pepper hand selected performers who now make the Frim Fram Foxies.

You recently experimented with something new, “suicide burlesque” where the audience picked the songs for the girls to dance to. How did that go?
It was a truly amazing turnout with standing room only. We decided that we wanted to do an improv show between our themed runs. This gives the girls a chance to take a break from choreography and costumes and also gives the audience some unscripted excitement. For me, it was really scary to not know the order or what I would be performing to and wouldn’t you know it, I was chosen first! You truly know it is not planned as I got the song “Jump, Jive, an’ Wail” which is not my cup of tea at all. I had a giant green boa but worked in the Charleston and fast movement. The girls were amazing and professional. The best part was getting to watch my sister performers and giggle WITH them as they anticipated the next movement and strip. We will be doing this again soon!

You got another themed show coming up on August 10th, “In Living Color Burlesque.” Can you tell us more about what audiences can expect at that show?
Well our “In Living Color” theme show is based on the 90s. We will have everything from Madonna to hip hop. I think what I am most excited for is our group act that Tana the Tattooed Lady has been working very hard at creating. It is sure to evoke some nostalgia. Be on the look out for some grunge and neon. It is all 90s music but our themes are varied. I don’t want to spoil everyone’s hard-made plans so you’ll just have to come and find out!

Are there any other troupes in Portland that you guys are currently digging?
As I mentioned there is not too many troupes in Portland but I would say the most established collective is The Rose City Shimmy. They are comprised of Charlotte Treuse, Itty Bitty Bang Bang, Meghan Mayhem, Hai Fleisch, and Baby LeStrange. I have personally worked with them in different shows on several occasions and I adore them all. When I started burlesque in Portland, I was a kitten for The Rose City Shimmy before debuting at a Shimmy show. A kitten is a wonderful helper that picks up our clothing after removal.

Who are some of your burlesque idols/influences?
It is hard to say who everyone in our troupe’s idol is but paying tribute to our legends is very important for us. A legend is a burlesque performer of the past who is living or deceased. My current idol is Marinka, a burlesque legend. She is tall exotic and has an amazing heart. I also adore performers like Evilyn Sin Claire of Sinner Saint Burlesque, Michelle L’Amour, and Dirty Martini.

Any advice for troupes getting started out there?
Make sure to make it clear who is making a final call. If you want a good troupe, you need good leadership and the ability to make tough decisions. This can mean saying no to a friend or disagreeing with a dance move or costume choice. In my opinion, one of the biggest differences in making a themed show with a bunch of independent performers and a troupe show has to do with content. It must be cohesive and feel like everything is planned and intertwined. Having a clear leader helps from getting the group stuck since everyone is always very different. Have fun with it and make sure you like who you are with!

Thanks to Holly for taking time from the shimmy and shake to talk to us. Portland, keep  your eye on the Frim Frams, I think they’re going to be around for quite a while. Aren’t you lucky!

Stay tuned for next week’s Tuesday Tease when we preview the upcoming session of Dr. Sketchy’s Anti-Art School in Seattle.