Part 1: Hard Tickets? What You Talking About! 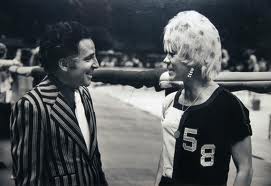 Today, we have a guest post from Jerry Seltzer, often referred to as “The Commissioner” of Roller Derby. His father, Leo Seltzer, invented the sport in 1935 and Jerry has followed in his footsteps since 1957, going from Roller Derby promoter (SF Bay Bombers) to television syndicator, to co-founder of BASS tickets, to Vice President of Sales and Marketing at Ticketmaster and now, finally, to Brown Paper Tickets, where he is serving a role as an Outreach and Sales Representative. We are honored to have a living legend as part of our team and Jerry has a ton of great stories on Derby history and the history of the modern ticketing industry as we know it today.

Today’s post is the first in what, we hope, will be an ongoing series. So, without further ado, I give you Jerry Seltzer, the Roller Derby Jesus!

I first handled box office for Roller Derby in San Diego in 1957. They were having games every night at Jack Murphy Stadium, and we ordered 20 sets of tickets from Globe Ticket Company, which included all 3000 reserved seats; the remaining General Admission tickets were sold off of rolls, different colors each night.

We would have to “rack” the tickets in wood holders, by section and row, which took an endless amount of time, put on sale a week of games at a time. Tickets had to be counted out and given to cashiers for each night. Customers would have to go from cashier to cashier to get the section they wanted, and then we checked them in, did a box office statement after counting the unsold tickets (“deadwood”) and putting them in a box to save for any IRS or city tax audits.

In 1959 when I started operating Roller Derby in the San Francisco Bay Area, we established some outlets at various private box offices around the area, and paid them commission for each ticket they sold. Again, customers who wanted a specific section had to chase around to find it. And we had to pick up unsold tickets the day before the event so we could have all tickets on hand for the cashiers, losing sales in outlying areas.

We took phone reservations, manually, and since credit cards were not used for phone sales, we had huge will call lines that had to take money, and we cancelled from 10 to 40% of our reservations every night.

Then, in the early 60’s, Ticketron came into being. Using a huge Control Data mainframe all information had to be imputted manually, and the outlets did not have CRTs (Cathode Ray Tubes, eventually replaced by the PC), but instead inserted data. The service charge was 35 cents to the producer and 25 cents to the buyer.

We signed on as soon as possible, and our sales (with outlets at Sears and Montgomery Ward) jumped dramatically, especially with our promotion on live television. (Brown Paper Tickets Producer Hint: A somewhat related note, sales for customers will increase dramatically if they include the Brown Paper Tickets logo in all their media ads, posters and event information. I know, it sounds stupid to even tell people, but many producers skip this seemingly obvious step)

When Roller Derby toured we used Ticketron wherever we could……in Chicago, New York, and a few other major cities at the time. Otherwise, we used local box offices with hard tickets and had to trust they weren’t stealing from us…some did!

Still no phone sales from Ticketron and, since no one had PC’s, the only way to buy was through an outlet or at the event itself. Still, as we expanded our Roller Derby network (by videotape, no satellite) and we became more and more popular, the percentage of Ticketron sales increased, with the majority of our sales in the Bay Area, Chicago and New York being handled by them. But they were an inflexible bunch; they put the use of the computer out there, no promotional help or co-operation:  “This is what we are and do. Take it or leave it.”

The largest crowd ever to see Roller Derby was September 15, 1972, when we played at White Sox Park (that’s right, between Comiskeys) to over 50,000 people, virtually all sold through Ticketron, one of their largest sales ever. We scheduled a game at Shea Stadium in New York the following year, put it all on Ticketron, were elated when we had 22,000 ticket sold the week before and looked forward to a sell out.

When I arrived in Manhattan the night before, I checked on our ticket sales, and they were at 22,000! Being slightly upset, I contacted my Ticketron client rep and he sheepishly told me that the entire East Coast mainframe computer had been down for five days, and the “company” did not want to broadcast it to their customers. If I had known, I would have put hard tickets at Macy’s and other locations during that week. Another great lesson for producers out there, never withhold information from your ticket buyers!

The next night we had 27,000 at Shea, not the 50K plus crowd we were looking forward to. And it started raining several hours before game time which killed all walk up sales.

What happened next was, my partner Hal Silen and I revolutionized the computerized ticketing industry.  Read the next post about BASS, Ticketmaster, Bill Graham, how I almost bought an NHL Team, the Hells Angels and much more. Just appreciate where Brown Paper Tickets is in this business, and how it not only makes ticket buyers lives better, but all those in our wonderful industry.  Yes, I am currently in sales with Brown Paper Tickets and next time I will tell you why I feel I am doing penance by being with them for not only the good but the evil I brought to the business.