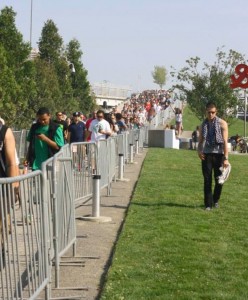 You’ve heard it. Marijuana is the new merlot. Green-tie is the new black tie. The modern pot party is here and if you live in Washington or Colorado, you’re invited.

Wait … where are all those hip gatherings starring Mary Jane?

If you’re a Washington or Colorado event organizer, you may have considered having a tasting, concert or theater event, appealing to the epotcurious. White linens. Dazzling chandeliers. Marijuana mashed potatoes served out of a martini glass.

Or what about a weed wedding? Pot weddings complete with joints as favors, budtenders and bud bouquets are a new trend according to a recent New York Times article. Marijuana tourism offers another pun-rife, alliterative business opportunity: Bed and Bakefast anyone? How about a Toke Tour?

Legally, residents of Washington and Colorado can purchase pot and imbibe in private. But curating a compliant 4/20-friendly event isn’t cut and dry. Legal haziness over what constitutes public and private has made organizing a marijuana soiree somewhat of a pain in the gluteus maximus.

Jane West, owner of Edible Events, Co., an event planning company that specializes in cannabis events ran into a few snafus when she planned Classically Cannabis: The High Note Series with the Colorado Symphony Orchestra. Originally, the three-concert fundraiser was a public event until Denver city officials urged the Colorado Symphony to shut it down.

But the show must go on. And so, West worked closely with the city and turned it into a private, invitation-only affair with donations. “There are a lot of unsafe, unregulated events,” West said. She stressed that her events are bring-your-own-cannabis (BYOC) and strive to comply. “I talked to 6 different gallery owners and picked a private gallery with a large outdoor patio.” The promotional page for the concert included a lengthy disclaimer.

The last of three concerts wrapped up on August 15. Despite all the hoopla beforehand, they went smoothly. Lesson learned: work with the city, host private events and strive to comply.

Currently, laws in both states prohibit open and public consumption on public property. Despite what a lot of people think, public consumption includes vaporizers and medibles, like brownies. What about a private loft, farmhouse or gallery? Sure, but opening a large marijuana event to the public might present issues. And before you take your party to the high seas, keep in mind Washington waters are regulated by federal agencies.

Seattle Hempfest set up two 21 and over adult lounges, shielded from public view. Inside the sponsored tents, adults sat comfortably on lawn chairs set up around tables, quietly puffing, passing and chatting.

2014 was the first year Hempfest included the lounges. Vivian McPeak, Executive Director of Hempfest explained in the event program, “The 21 and over lounges are part of a pilot program aimed at reducing youth exposure to pot smoke and providing cool spaces with education, refreshments, and ambiance. If we can make this model work over time it will be the first step to having adult toking areas in every public event in Washington.”

Along a similar vein (er…strain) the Denver County Fair (Aug. 1-3) set up a carded pot pavilion on a separate level from the rest of the fair. According to the fair’s website, “In compliance with Denver’s new laws, there will be no marijuana allowed on the premises during this event.”

But what’s a pot pavilion without … pot? A rolling contest, a blue ribbon marijuana plant contest, Doritos-eating contest, and laser light show. Judging for some of the activities took place off-site. All fun and games and cannabis compliant. However, this event didn’t end so smoothly. Fair officials are currently investigating three separate claims of THC-poisoning that allegedly came from a chocolate bar sample handed out by a fair pavilion vendor. The candy was supposed to be drug-free.

Roll Out: What Should Event Organizers Do?

Learn from example. A cannabis-friendly event can be a good or bad high depending on how you navigate the nebulous new laws.