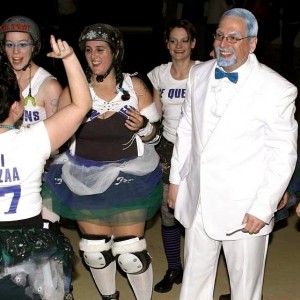 For most, derby season matches the “when weather sucks most” of the four seasons. Cold winters, insanely hot summers, basically when people search for indoor entertainment.

One exception: the holidays. I don’t care if November through December has terrific weather in your area, the holiday season is the best time to make money, raise funds and promote your league.

“Really Bob? Everyone is running around with holiday parties to attend, family functions and shopping to do. Where does roller derby fit?”

1. Don’t Go Without an Event During November or December

I understand you’re skeptical. But consumers spend more money during the holidays. Lots of money. How much?

Enough that retail stores live or die by their fourth-quarter results: sales and profits October through December. In the U.S., holiday sales of consumer goods are as high as 40% (dollar value of annual consumer purchases). And you wonder why retail managers develop nervous ticks. As a retail manager, I recall a single day our department store was to make (raise pinky, make Dr. Evil face): one million dollars. Today, that same store probably projects seven days with sales that high.

Chalk it up to holiday cheer. Remember, you are a business and need to make money. Is that what derby is about? Of course not. Yet as we hear continual stories of leagues in financial trouble, we know money can bring security, keep skater costs low and the league can increase charity contributions if it does well. There’s nothing wrong with a healthy profit.

“Seriously Bob, with the parties, family gatherings and shopping, how would we draw a crowd?”

Don’t let the grinches fool you. You would be surprised how attendance for the arts, professional sporting events, concerts and even alternative sports thrive during the holidays.

Twice in my son’s 14 years (good lookin’ like his dad; smart too), the man in red surprised him with event tickets as his main gift. Did he feel slighted? Nope. We had a blast. Last year, the boy wonder’s gift was trip to Minneapolis to see Nitro Circus at the Target Center. This three-hour show featured 50 X-Game professionals and many performing tricks. Best gift ever.

Nitro Circus changed my view on how showmanship, announcing, and production planning can propel an alternative sport from a mall performance to attracting enough people to fill an entire arena. The thrill of the atmosphere turned the audience into immediate fans. Patience, smart marketing and well-executed promotion can accomplish anything. The most interesting part?

It was planned and practiced about three years before it was brought to the U.S. They shot for the long run and it paid off. The shows were sold out worldwide in 2014 and already selling for 2015.

Patience could be 18 months of recruiting, training, business planning and networking within the community before ever skating a public game. What do you think the odds are of long-term survival between a league who practices patience and one whose first game is five months after forming? Who’s to say derby wouldn’t attract large crowds if planning was better? It used to. Derby once sold out Chicago’s old Comiskey Park. Over 50,000 fans. 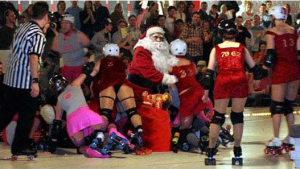 Derby can achieve success all the way into mid-December. And who’s to say a New Year’s Eve game and after-party won’t work?

A holiday game is a nice start. It could be the first home game scheduled or an exhibition game. Exhibition games, with amusing themes carried through in all of the little details are a blast.

I worked a handful of these. The theme dictated the entire production. Teams created boutfits for the event and had names related to the holidays, with a twist: Sugar Plum Scaries for example. Yeah, it was kind of a warped twist, but a fun one. In one instance, each skater created a name just for that night. An announcer’s dream (sarcasm alert).

Money flows during the holiday months. So consider what a game during this time could mean to the league. Then do what’s necessary so both skaters and the fans have a blast. Do some silly things with penalties, change the rules you don’t like (it’s not sanctioned) and win over some new fans.

3. Remember, it’s the Most Wonderful Time of Year…for Selling Tickets and Merchandise 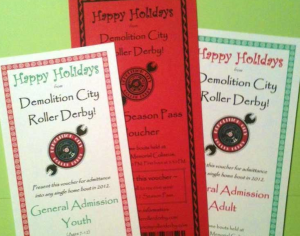 The gate is always important, but less so for a holiday event. Gauge ticket sales and give as many tickets away as you near the date. Why? They will spend money.

Again, the holidays have people in a buying mood and it’s not just for others. If properly planned for, it could be a boon for merchandise, season passes and you’ll love this: a single game ticket voucher.

Every league I know who has instituted the single game voucher has had success. Why wouldn’t they? Season passes sell during the holidays, but the one receiving the pass must either be at the game or know the recipient has a derby habit. I noticed leagues almost getting the idea by offering advance sales for specific dates.

Most people don’t have any idea what game-dates the recipient can attend. Make it easy. It’s simply a ticket good for one admittance to one game during the specific home season. Amazing stocking stuffers. Have them on hand and make sure announcers mention them a thousand times.

Better yet, sell them cheaper than usual game tickets. Why? Many of them will never get used. A sizeable portion of vouchers will get lost, forgotten, so sell more of them. Sell them online too. Use ticket blitzing to push sales. If you use Brown Paper Tickets, call our Client Services department who can help you create these.

League shirts are always important, but make sure you have plenty of standard merchandise inventory, dig out any outdated merchandise, mark it down, separate it from the new stuff, and use your creativity from there. Create a “Stocking Stuffer” section at the merchandise area. I’ve seen league craft clubs make a killing on handmade, one-of-a-kind things with or without the league logo.

Don’t forget kids. Though kids clothing is not always an easy sell and the range of sizes is a real investment, look through sites selling promotional items and find kid-friendly merchandise. There are a million different, inexpensive things you can have made with the league name on it. Never forget your profit margin goals. Choose items that will handle a healthy markup. Kids rule how parents spend money; so make them happy with cool, age-appropriate goodies. A multi-pack of team pins and stickers is perfect for kids and adults.

4. Don’t Take the Holidays Off from Public Appearances

“Well, everyone wanted the time away so we’re taking November and December off. We all need the break.” Yes, you do. Everyone deserves a break, but one or two league commitments during that time isn’t much to ask.

Think about it. Every mall is looking for groups to wrap gifts. Fill a few shifts and have girls in their boutfits. Hundreds, maybe a thousand people, in larger malls, could be easily exposed to the league. Bring schedules if your season starts shortly after the New Year. Go caroling in subdivisions where the fan base is low.

Don’t forget local holiday parades, various charities or supervising a toy drive or giving tree. If you work with a charity, promote it. These activities could produce interviews on TV, photos in the local newspaper or promotion on the radio. The closer the league is to the community, the more success you will always have.

5. Have a Happy Holiday Season with Family and Your Derby Family

I’ve said it before and I’ll say it again: Roller derby is not a hobby; it is a lifestyle. We all know this to be true. Though this blog may sound like I’m a proponent of a never-ending season, that’s hardly the case. I get it. I know the time commitment. My balancing act between derby and my family commitment outside of the sport isn’t easy.

That said, I have a derby family too. You can do fun parties and activities with your derby family while maximizing your holiday marketing efforts.

November and December is my down time as well, yet I help the league take advantage of what the season provides us. Those holiday derby events and functions account for many of my favorite moments. So make it memorable, enjoy each other and if everyone helps a little, you end one year with setting up a better next year.