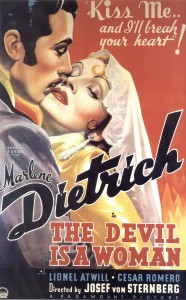 Friday, December 13 I The Devil Is A Woman – Seattle, Washington

The Devil Is A Woman is the last and most stylized of the Von Sternberg/Dietrich films. Stunning in bright black and white, it’s the story of Concha Perez (“The most daaangerous woman aliiiive” drones Lionel Atwill as a bitter and broken-hearted cast-off, filling in quite nicely for Von Sternberg).

Concha begins as a poorly dressed cigarette-maker with curiously impeccable make-up and hair in 1890’s-ish “Spain.” Cesar Romero, handsome as a God, plays the gay, young patriot enthralled with Concha after seeing her in perhaps the most intriguing Spanish-comb/pom-pom/mantilla combination ever enshrined on film.

The Travis Banton costumes for Miss Dietrich are over-the-top stunners, and really her hair is worth mentioning again: an ever-changing kaleidoscope of lace, Spanish combs, spit-curls and carnations. There are a lot of squawking, messy, flapping birds, so if you get bored waiting for Miss Dietrich to show up while the plot advances (an adaptation by John Dos Passos, but you’d never know it) those birds will give you something to think about.

Selected by the artist Mark Mitchell. 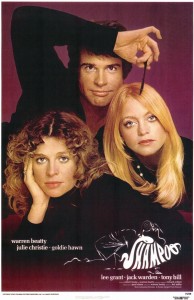 A ’70s take on late ’60s LA: farce and ridiculousness enacted in tiny dresses, ruffled shirts and big hair. Set in 1968, Shampoo presents the side of sixties fashion that made it to expensive Beverly Hills boutiques and hair salons. Gorgeous women in long bangs, miniskirts, and frosted makeup circle around George, the good-looking hairdresser whose uniform is as calculated and elaborate as theirs: shag haircut, heavy jewelry, unbuttoned shirt, leather jacket. At the end, when the plot drops this polished group into a wild LA party they look, well, overdressed.

Chiyo Ishikawa helped bring revelatory exhibits to the Metropolitan Museum of Art and the Museum of Fine Arts in Boston before moving to Seattle in 1990 to take an assistant curator position with the Seattle Art Museum. Now SAM’s deputy director for art and curator of European painting and sculpture, Chiyo played a key role in bringing the Picasso show to town in 2010 and directly imprints the museum’s calendar with her scholarship of international art history. Her 2004 book, The Retablo of Isabel la Catolica by Juan de Flandes and Michael Sittow was awarded the Eleanor Tufts Award from the American Society of Hispanic Art Historical Studies and was given the acknowledgement of The Order of Isabel la Católica by His Majesty King Juan Carlos of Spain. 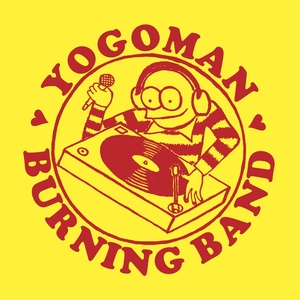 Yogoman hails from the planet Yog, where its inhabitants create ridiculous, quirky, and uninhibited dance moves on the regular. Yogoman landed in the Pacific Northwest finding a willing human vessel through Washington State’s own Jordan Rain, currently a Bellingham resident. Rain formed Yogoman Burning Band (YBB) in 2006 to fire up the often subdued and dark corner of the USA, lighting up crowds of all-ages and taking it to the streets with their infectious and engaging ska/soul brass band style.

Raised in the Jet City, Rain came up through Seattle’s underground all-ages music scene in the 90’s which he participated in as a musician and booked house concerts. Being a generally intimate climate for experiencing music and culture, the Do-It-Yourself/all-ages music scene tends to instill a value of removing barriers between audience, entertainers and the industry, making it a community process, which Rain has taken with him to Yogoman Burning Band. YBB invites their audiences/fans/friends to engage with their music through dance and personal connection.

Join international Elvis tribute artist Anthony Shore backed by a full band, including horns and singers, as they rock you into the holiday spirit. Come and enjoy all your favorites at this rock-n-roll Christmas show.

A lifelong Elvis fan, Anthony was born and raised in London, England. Anthony honed his skills in Salou, Spain working for an entertainment company, performing over 700 shows a year and traveling to many destinations across Europe including: Spain, Tenerife, Cyprus, Germany and France.

Anthony is a passionate entertainer and has a vocal ability that is second to none in the Elvis world! Anthony is hardworking and very approachable. His stage demeanour is always respectful to Elvis and he’s funny, charismatic and charming; always endeavouring to win the hearts of his audience. He is also only one of the few Elvis tribute artists in the world to have been able to sustain a full time career performing as Elvis.

Anthony considers it an honor to be able to do what he does best and to meet all of the fantastic people over the world…..Here’s to many more years! 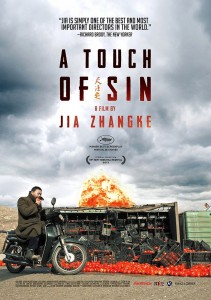 Starts Friday, January 3 I A Touch of Sin – Seattle, Washington

Internationally acclaimed Chinese master Jia Zhangke (Platform, The World) won the Best Screenplay prize at Cannes for this startling and violent modern wuxia tale of four outcasts on the margins of a rapidly changing China who channel their underclass rage into a bloody and murderous rampage.

In A Touch of Sin, Jia confronts utilizes a fascinating mix of social realism and contemporary kung fu to portray China’s extreme social changes. Jia has a daring aesthetic, drawing inspiration from real-life events to compose a visually arresting, emotionally disturbing fresco of the underprivileged.

His portrait of China unfolds in four chapters, following an episodic structure that seems to adopt the brevity and concision of weibo (China’s Twitter-like microblogs). The film unveils the tragic destiny of four sinners from four different provinces: a miner (Jiang Wu) who takes revenge on a corrupt village chief; a gun-loving migrant worker (Wang Baoqiang) who shoots his way to easy money; a modest sauna receptionist (Zhao Tao) who, humiliated by a client, turns into a fierce, dagger-wielding goddess; and an abused youth (Luo Lanshan) who endures long working hours and all manner of psychological violence.