Welcome to this week’s Artist Ticket Picks. The Artist Ticket program gives our customers a way to donate to causes that we care about.

If you’re a ticket buyer, check to see if the limited edition ticket is available at the beginning of the ticket check-out process or by visiting the Artist Ticket page. You receive a small piece of collectible art and support a valuable cause just by checking the box in the Artist Ticket widget when you’re purchasing your tickets.

Led by its creator, the charismatic singer, songwriter, dumpster diver and one-time gravedigger Giovanni DiMorente, EL Radio Fantastique is a collection of talented and electrifying musician-performers from the small farming community of Point Reyes Station, California.

The overarching musical influences for the group derive from DiMorente’s coveted record collection scavenged from abandoned tenements in New Orleans and a lifetime of dumpsters. EL Radio Fantastique comprises a unique menagerie of sights, sounds and musical styles. Indeed, the vibration emitted from this group defies all genres as much as an archaic knob would turn on an antique radio. EL Radio Fantastique is known to put on bewitching and alluring shows with steamy theatricality. Consistent with DiMorente”s folklore, witnesses have remarked that the band’s players appear to be charmed and somewhat possessed, inspiring a visceral and enchanted concert experience.

The Round is three songwriters share the stage together with slam poets and live painters/visual artists, joined by a mix of improv backing musicians for a relaxed evening of unique collaboration.

James Apollo has been dubbed “King of the Road,” in regards to a young life of touring.  He is best known for creating emotionally textured soundscapes, often gaining musical and lyrical citations to William Faulkner, Tom Waits, and classic sounds of the West. According to Allmusic, “Apollo’s broken, bluesy tenor moans out his tale of broken hearts and substance abuse”. His songs have been featured in a number of independent films, including the feature, Sun Dogs and award winning film 38 témoins.

Ghosts I’ve Met is the project of Michigan born songwriter Sam Watts. The group was formed by Watts in Seattle along with guitarist Ben Blankenship and cellist Brent Arnold both formerly of Seattle band Modest Mouse. Watts and company create songs that are simultaneously devastating, and soothing and are filled with hand tinted photographic imagery.

Desert Dolls Roller Derby strives to be community oriented by getting out and doing fundraisers and charity bouts to raise awareness concerning issues affecting the Valley. What started out as a small group of friends has grown into a league of over 100 strong, independent women all with the same goal in mind: to provide family-friendly entertainment through one of the fastest growing sports in the country.

The Pretty H8 Machines battle it out on the track for a second year in a row against the Joon Cleavers. 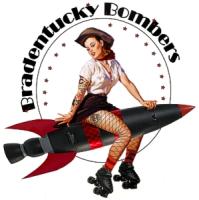 Embracing traditions from every Derby decade from the 1930s until now, The Brandentucky Bombers combine a dedication to the purity and competition of the sport with the spectacle of tongue-in-cheek skating personas and somewhat outrageous uniforms. The Bradentucky Bomber’s logo represents the qualities that they encourage in their skaters derived from the derby greats who came before them — female individuality, strength, toughness, femininity, and sex appeal too! The Bomber’s range in age from 18 to 40+. By day, they are working wives, mothers, students, teachers, motorcycle mechanics, administrative assistants, bartenders, web designers, artists, and everything inbetween.

For this upcoming bout, Bradentucky Bombers Roller Derby will face off against Palm Coast Roller Derby. Seating is limited so bring a chair. Tailgating and FREE BEER will be provided by Little Giant Brewery (for those of legal age) and begins at 6:00. Doors open at 6:30. Bout at 7:00pm.

A portion of the raffle proceeds will go to the Bomber’s chosen charity: Relay for Life Bradenton

Friday, April 18 I The Women, the Flesh, and the Devil: a Burlesque Evening in Black and White – Seattle, Washington

Drawing inspiration from the Prohibition era, The Women, the Flesh, and the Devil immerses the audience into a 1920’s silent film experience set at the historic Columbia City Theatre. This black and white performance combines burlesque, dance, and theatre for a completely unique experience. Come dressed in 1920’s costume!