Artist Ticket Picks: Getting Back to Abnormal, Roxy Music, Body Painting and more. 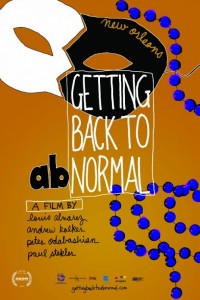 Sunday, February 3 I Getting Back to Abnormal – Seattle, Washington

New Orleans’ long history of political dysfunction gets a new lease on life when Stacy Head, a polarizing white woman, wins a seat on the city council after Katrina. Four years later, she needs to get black votes to be re-elected. Getting Back to Abnormal follows the odd couple of Head and her irrepressible political advisor, Barbara Lacen-Keller, as they try to navigate New Orleans’ complicated political scene. Featuring provocative commentary from New Orleans cultural figures like David Simon (Treme, The Wire).

** WARNING! This trailer contains language that may be offensive to some viewers. **

All right Florida! Get ready for some hard-hitting, flat track roller derby when the Bradentucky Bombers Roller Derby take on the North River Rolling Renegades. This bout takes place at Astro Skate in Bradenton.

Seating is limited so bring a chair. Tailgating and FREE BEER (for those of legal age) begins at 6pm with the bout starting at 7pm.

As always, there will a raffle and a portion of the raffle proceeds will go to the Bombers’ chosen charity: Visable Men Academy.

Note:  Entry is at your own risk. The Bradentucky Bombers nor Astro Skate shall not be held liable for any loss, injury, or damages sustained on the premises. Trackside floor seating is reserved for adults 18 & over ONLY. The Bradentucky Bombers nor Astro Skate accept no liability for any injuries or damages caused by skaters or refs falling onto or sliding into spectators.

Roxy Music are an English art rock band formed in 1971 by Bryan Ferry, who became the group’s lead vocalist and chief songwriter, and bassist Graham Simpson. The other members are Phil Manzanera (guitar), Andy Mackay (saxophone and oboe) and Paul Thompson (drums and percussion). Former members include Brian Eno (synthesiser and “treatments”), and Eddie Jobson (synthesiser and violin). Although the band took a break from group activities in 1976 and again in 1983, they reunited for a concert tour in 2001, and have toured together intermittently since that time. Despite a 18-year gap between activity Roxy Music never officially split up. Ferry frequently enlisted many Roxy members as session musicians for his solo releases.

The timeless cool and alien emo of Roxy Music is compressed into a BBC doc, supplemented with complete versions of “Ladytron” from the 1973 Montreux Jazz Festival, along with live performances from ’75. Part of Music Craft, Northwest Film Forum’s ongoing series of rare concert footage from music legends.

Looking for something different to do on a Saturday Afternoon?

Join ABC Bodyart and their cast of sexy male models for an art class like NO OTHER!  Master Body Painter Vonetta Berry will guide students on techniques to create special effects on canvas, as you marvel at your masterpiece. And you will enjoy some prizes and surprises as well!

Be sure and take detailed notes, as your canvas squirms with every stroke of your brush, oh, did we fail to mention that you will be painting on body parts? What an excellent way to start your weekend off!

How does it work?

Artists will come learn to paint a gorgeous full body art model live in the ABC Bodyart studio. Bring your own libations and have a great time.  The fee is $200  for the full body, semi nude model! Tipping is encouraged.

Voyeurs for $15 come watch your friends learn to paint our sultry models, while sipping on your libations.  Cheer, jeer, and leer as our models create a one of a kind experience for the artists!

There’s no doubt that there’s a better future in store for Naomi Wachira, especially after her great breakout year in 2013. Named the Best Folk Singer in Seattle by the Seattle Weekly and featured on their cover, Naomi became the toast of the town, which in turn led to a friendship with the much-loved indie songwriter Damien Jurado, who came onboard to produce this album. The result is Naomi Wachira’s debut full-length, a portrait of a Kenyan artist at home in the Pacific Northwestern United States.

When you listen to Naomi’s songs, you’ll hear the lifelong influence of two powerful, groundbreaking female songwriters: Miriam Makeba and Tracy Chapman. Makeba became one of the biggest stars on the continent through her socially aware songwriting, something she shared closely with American songwriter Tracy Chapman. Chapman was a voice for social change as well, but Naomi loved her positive idealism, a concept that informs all the songs on Naomi’s album. Makeba’s also a personal icon for Naomi, who cites “the way she carried herself, her grace and character,” as influencers. “She was able to maintain her integrity as an African. She didn’t need to change who she was to fit with Western audiences.”

The songs from Naomi’s debut release are plucked from her own life, powered by her Northwest musical community, and imbued with her own sense of hopefulness. The Seattle Times had a recent photo of Naomi at Seattle’s naturalization ceremony, receiving her American citizenship with tears streaming down her face. It’s a remarkable photo, and a reminder of the distances we often travel to find our dreams.