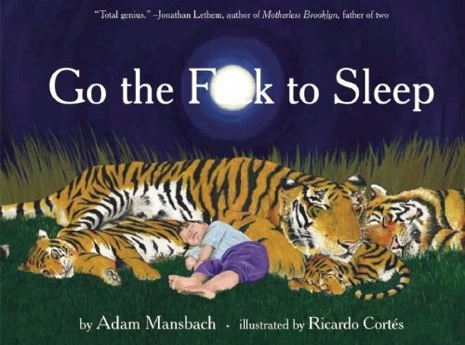 According to Wikipedia, Mansbach’s two year old daughter Vivien took up to two hours to go to sleep. Exasperated, Mansbach posted on Facebook “Look out for my forthcoming children’s book, “Go the F*** to Sleep.” His post received enthusiastic response from his friends and this response inspired Mansbach to actually write the book. Advance pdfs of the book began to be distributed via e-mail and the book became a viral sensation even before it’s scheduled release of October 2011, which is this month. The book was #1 on Amazon’s best-selling list by May of 2011 and so the publishers decided to push the release date up to June of 2011 with an increased printing of 150,000 copies. The film rights have even already been optioned by Fox 2000 and all of this is due to it’s popularity on social media sites like Facebook. A true testament to the power of social media.

Masbach will be talking about the book in Berkely tomorrow night at Jewish Community Center of the East Bay in what promises to be a stimulating conversation about parenting, granting parents permission to admit their frustrations and to laugh at their absurdity. Amazingly, the talk is not sold out so if you’re in the Bay Area and are a parent, be sure to pick up your tickets right over here. They’re even offering childcare for $5 a child, so your little angels won’t have to hear you giggling.