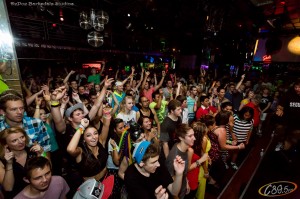 C89.5 FM is a student-run radio station that gives high school teens an opportunity to explore technology, production, creativity, music, community and event organizing. With arts education funding trickling down to the bare bones around the US, a creative outlet for students that may not otherwise be available seemed a worthy cause. In following with Brown Paper Tickets’ low-power FM radio project (spearheaded by Sabrina Roach, our Public Media Doer), KNHC stresses the importance and value of broadcast as a community connector. KNHC also boasts a worldwide listenership via their online audio stream, and has received accolades as far reaching as Rolling Stone magazine and Billboard’s Top 40 of Top 40. Also, while a public Seattle-based radio station, New York’s Village Voice once hailed them Best High School Radio Station in New York (thanks to their web audio stream).

Music. Education. Nonprofits. Community. We support them all—especially when their stars align.