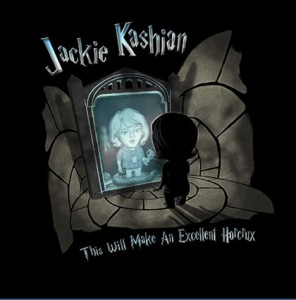 Jackie Kashian begins her new special, This Will Make an Excellent Horcrux, with a couple of notes up front, away from her audience. For the uninitiated, she explains that a “horcrux” is a Harry Potter reference, an object that contains her soul. She may not look or sound like a prototypical “dork,” but she does host a podcast called The Dork Forest, and her dork cred becomes hilariously obvious later on. The second thing she does is congratulate her audience on their choice of downloading the special, with the corollary that seeing stand-up comedy live is the best way to experience it.

Horcrux was taped at Acme Comedy Company in Minneapolis, and it feels like everything a good night out at a comedy club should be. Kashian is smart, bracing without being bitter, and she knows how to keep the punchlines rolling without seeming manic or insincere. It’s the kind of set that might make those who look down on “club comedy” as the petri dish of the lowest common denominator in stand up reconsider.

Of course that’s not a fight Kashian is taking on in an obvious sense. She takes on stand-up stereotypes that bug her because, as she says, she loves comedy, and she’ll do comedy wherever they’ll let her. Her first line in the live set after introductions is “I’m overweight. You may consider that addressed.” Translation: no tired fat jokes will follow. Kashian does, however, address her appearance further to establish a sense of place rather than to self-deprecate. Where she grew up in Wisconsin, she’s a solid six. In L.A., where she lives now, she’d be cast as an airport cop.

Kashian also takes apart standard “male” premises that women lose interest in sex and gain an interest in money after marriage, and offers “Bitches, am I right?” as a punchline. But again, she’s not scolding or preaching. Her point is more about how that material warped her attitude toward relationships. And she does admit there are two other tropes she finds utterly true, at least in her own case, about not listening to your spouse and critiquing their driving.

Which is not to say this special is overtly meta. There is a lot of material dealing with the stand-up world, but mainly because, as the title suggests, that’s where Kashian’s soul lies: she is a comedy dork. The “dork” part developed when she was a kid and her parents decided no one could hit each other anymore, and she poured that “bottled rage” into reading. It played out later on when she married a video-game developer, and they were dorks together. Enough so that when a problem develops involving sex, they “LARP it out” (for the uninitiated, that would be “live action role play”).

Kashian can turn her wit outward, and has some great stuff about Scott Walker’s labor problems, the anger issues of guys with mullets and Applebee’s. But the center rightly remains the sharp-tongued, no-nonsense dork who fashions horcruxs out of her punchlines.

Saturday, April 12 I Throwing Shade Live  – Los Angeles, California  Bryan y Erin put on their fanciest tee shirts and give you a monthly dose of unfiltered shade. A full evening of stories, bad impressions, celebrity guests and of course, a roundup of all the ‘ssues important to ladies and gays, treated with much less respect than they deserve.

Friday, April 25 I RISK! Live – Pittsburgh, Pennsylvania  RISK!, a live show and podcast hosted by Kevin Allison (The State, Reno 911!, Flight of the Conchords, etc.), is the show where people tell true stories they never thought they’d dare to share. The RISK! podcast recently surpassed its 11 millionth download and has a robust and ever-growing fanbase around the globe. People like Sarah Silverman, Margaret Cho, Marc Maron, Michael Ian Black, Adam McKay, Lisa Lampanelli and more, as well as regular folks from around the world, have told their true life stories on RISK!. Slate.com calls RISK! “jaw-dropping, hilarious and just plain touching.” If you love This American Life or The Moth, and you can handle astounding, uncensored, raw honesty, RISK! is the show for you.