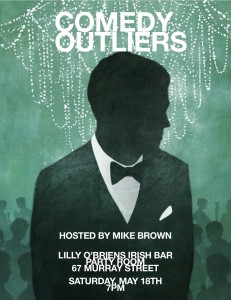 The Comedy Outliers have a show coming up this Saturday, May 18 at Lily O’Brien‘s in New York City. Their shows are free but we highly recommend you pick up tickets so you don’t show up to a full house.

When we at Comedy Outliers produce a show and say “You’ve been such a wonderful audience” – we mean it. A wonderful audience member is appreciated and always welcomed to comedy shows! Here are a few ways you can make sure you’re one of the wonderfuls.

1. Turn off your phones

Why would you have them on anyway? Pay attention! It’s a LIVE show! You silence your phones before a movie starts, and it’s a movie. Unlike a movie, a comedy show is with real people who can’t afford to ignore you (on screen or on the street).

2. Don’t talk during the show

In the crowd, you may whisper “That’s the funniest comedian I’ve ever seen. I want to support them financially forever.” On stage, all a comic hears is “Blah blah blah – I don’t like this person’s show so I’m going to talk through it.” Comics are insecure!

Don’t talk. We’ll think it’s a heckle. Or talk, if you WANT to heckle and leave the show in tears. Don’t invite that negative energy into a show.

3. BUT Respond if a comic asks you something

It’s okay. We asked you a question. Either way, a comic is going to continue. Just answer honestly. And for goodness sakes…don’t try to be funny!

4. Leave the jokes to the professionals

Comics have a microphone for a reason. Let us do the joking.

5. Only go to the bathroom while the host is on stage

It’s just courteous. Like we said above, comics have big egos and even bigger insecurities.

6. Keep your feet off the stage

It’s like the “elbows off the table” rule and you should know this already.

Remember you’re there to laugh and have a good time! Help us help you and we’ll all have a great time!

Thanks for reading! You’ve been such a wonderful audience!