Comedy Outliers: Blog About It! 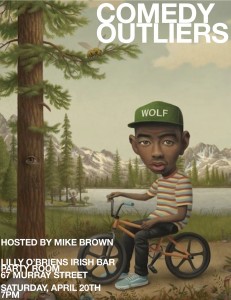 ay we feature another guest post from Brandon Collins and Mike Brown of Comedy Outliers. Brandon and Mike offer great advice to comedians, or performers in general, on how to survive and thrive in today’s competitive artistic climate.

The Comedy Outliers have a show coming up this Saturday, April 20 at Lily O’Brien‘s in New York City. Their shows are free but we highly recommend you pick up tickets so you don’t show up to a full house.

It’s sad that as performers, we have to do things that are not performance-related to have people come to our show. In 2013, having talent and a diligent work ethic isn’t enough. Sure we can host and produce the pants off of Comedy Outliers and get listed through various publication’s help, but if we don’t have any representation in the digital realm…we don’t exist.

In some cases, the digital medium doesn’t really lend itself to our cause. Let’s say you like the Comedy Outliers show, then you make sure to like the fan page. Sounds great (and THANK YOU) until Facebook monetizes our hard work. They suggest/force/penalize us into paying money so we can reach you, who’ve already agreed to being reached in the first place! All the work put into to creating our fan base is done just so we can pay Facebook to reach our fans? Something doesn’t smell right. We need to grow out of the manure.

If we want Comedy Outliers to grow as a show, we need continue to build a great show- not a stronger web presence. It amazes us how potential audience members might dismiss our line-ups because a comedian may not have a website. We’ve heard “Has [insert comedian here] been on TV? Where would I know them from?” In turn, we will say “take my word for it” but they want to take the comedians words, in 140-characters or less, before they make a decision. Some people would rather we have Outliers on Twitter instead of business cards. Ah, the power of the internet.

YOU (the reader) have the power in your hands. Don’t judge a show (or performer) by their web traffic. Judge them by their talent, and support them with your…well, support! Come out to a live show (like ours next Saturday, April 20th) or make a purchase of some merchandise so we performers can focus on performing.

This entry would be longer, but we’re putting some finishing touches on our show. If you can’t make it, hopefully the audience will blog about it. We’ll put it on our website. And podcast. And fan page. Etc…