Comedy Outliers: The Three Books That Influenced Us 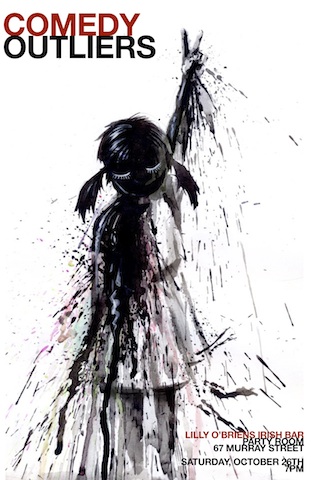 The Comedy Outliers have a show coming up this Saturday, October 26 at Lily O’Brien‘s in New York City. Their shows are free but we highly recommend you pick up tickets so you don’t show up to a full house.

We love to read and are always looking for books that will give us a unique perspective on comedy, life, and successful people. For this month’s blog, we figured we would share the top three books that have influenced our stand-up comedy and the way we view want the brand of “Comedy Outliers” to develop.

In case you couldn’t tell by the name of our show, we’ve been heavily influenced by Malcolm Gladwell’s thesis of factors that contribute to high levels of success. Gladwell’s assessment that it takes at least ten thousand hours of practice in order to master a skill really resonated with us. We spend numerous hours perfecting our stand-up comedy routines and producing independent shows to become masterful in our creative abilities. We also are firm believers in the concept of ‘opportunity’, which is mentioned several times in Gladwell’s book. Without certain opportunities and our willingness to pursue new ventures, we wouldn’t be getting the attention and chances that have been directed at us over the past few months. This book is essential for creative artists and anyone interested in a unique perspective on how Bill Gates, Steve Jobs and the Beatles became great successes.

Appetite for Self-Destruction : The Spectacular Crash of the Record Industry in the Digital Age by Steve Knopper

This vividly detailed novelization about the implosion of the music industry caused by its inability to adapt effectively to the digital age has us always keeping our ear to the ground. Music labels did not take the threat of Napster and mp3 files seriously and is still trying to rebuild in a world that no longer finds the idea of purchasing a full album compelling. In comedy, we have to be aware of the changes in the environment and what could potentially be the next big thing that we should consider for future projects. This book is a great reminder to never ignore the changing tides no matter how difficult or painful it might be to change your way of thinking. It’ll cost less in the long run.

Comic Insights: The Art of Stand-Up Comedy by Franklyn Ajaye

This book was written in the 90s, but the collection of interviews with famous comedians such as Chris Rock, George Carlin and Rosanne Barr are limitless in their wealth of knowledge and insight. It is important that as artists we take our crafts seriously and never wait for others to motivate us to achieve our goals. The comics featured in this book emphasize hard work, handling yourself as if you are your own independent business owner and staying motivated during the difficult times. As fans and students of comedy, we absorb this information to make sure we are always working to be better comics and producers. This is a must read for anyone who is a comedian or fan of the art of the stand-up.