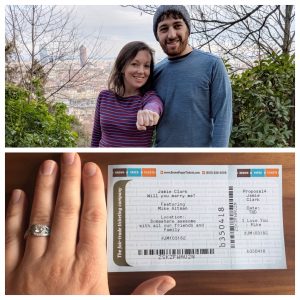 Two love birds, one ticket stub, so many shows…

Brown Paper Tickets has ticketed just about everything, but this is our first engagement.

Jamie Clark and Mike Altman went on their first date to a concert, and kept all of their ticket stubs from the following events. Mike says it just made sense to add another stub to their collection—this one for his proposal.

After Mike realized Brown Paper Tickets was located near his work, he walked over and chatted with our in-house representatives. Our fully custom bulk tickets are only $.10 each. We set up Mike with a custom ticket with Jamie’s name on it, and he was on his way.

Mike gave Jamie tickets to hold on to under the guise that they were for a concert that night. She stashed the tickets away, not realizing that there was anything special about them. Just another concert – another night.

On their way to the show, Mike asked Jamie to check the ticket envelope to make sure he grabbed the right ones.

“As I was opening the ticket envelope, I was trying to think of a joke like ‘Uh oh – these are tickets to the New Kids on the Block!’” Jamie said. “Then I was really confused and surprised when the first line I saw was ‘Jamie Clark, will you marry me?’ on the ticket.”

Jamie jumped up and down and accepted his proposal, before he could even get down on one knee. After the excitement, they continued their date at a comedy show. Although, she said she didn’t catch all the jokes as she was “doing backflips in [her] head.”

The couple is currently on vacation in France, enjoying their engagement and starting to plan their wedding. We are so happy for them, and thrilled that we could play a little part in their love story.

Join the fun. Wish the couple well and share your creative proposal story in the comments.