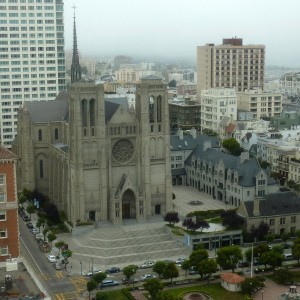 But at the top of Nob Hill, a ray of hope for performance artists and festival event organizers poked through that ubiquitous mist—the San Francisco Movement Arts Festival (SFMAF): A Walk About in Grace.

Guests walked around at leisure to experience the 19 stations of movement. A few stations had music, some featured chants and there was a full movement choir.

Tobin’s fierce commitment to local artists and community are values Brown Paper Tickets shares. Like us, Tobin believes in giving more and taking less. All performers were local with the exception of a couple guest artists. And proceeds would be divided among performers.

The event sold out one week before the big night. Our outreach team supported Tobin’s efforts early on—advising him on how to set up his event page, price tickets and market the event online. “We knew Brown Paper Tickets would take care of all the technical issues and the sales of the tickets, so we could concentrate on the event itself and the performances,” he wrote in a thank you letter to us.

Tobin reports (with a chuckle) that the first and most daunting challenge was just sitting down to draw up the event. It was an incredible feat to pull off with 12 dance companies and more than 100 performers.

With various stations, going on at the same time, sound presented one of the event organizer’s biggest obstacles. “Only 4 stations were allowed to have music. All other stations were in silence or with low singing.” He reports, “it went smoothly in silence as [it did] with music.”

With the number of performers, time constraints and limited access to the space made, rehearsal presented another obstacle.

Every station had a designated leader and every station leader had to meet Tobin once. “That worked well,” he says. Short tours of the cathedral were given to artists, most who were used to performing in smaller venues, like lofts.

Such a large gathering of artists had an unanticipated side effect: it acted as a catalyst for community, bringing together local dancers who may have never met otherwise. The festival capped off with a dance down the middle of the Cathedral and a dessert reception and “performance antics” in the basement.