Foodie Friday: Beer Wench and Vegetarian Nonsense At Jimmy’s No. 43 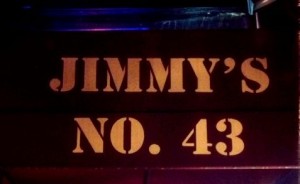 I’ve spent countless hours browsing beer events online, searching Brown Paper Tickets for some epic day-long adventure for my friends and I. The Hot Sauce Festival earlier this summer combined two of my favorite kitchen staples—hot sauce and beer—as well as a variety of awesome finger food from local restaurants. Amid the abundance of spiced snacks, however, I left still feeling hungry. Most beer events seem to center around linking beer with bacon; as a lifelong pescatarian, I’m usually the one nibbling out of the breadbasket and picking pork out of my salads. When I found out Jimmy’s No. 43 was hosting a wild yeast –beer pairing dinner that was entirely vegetarian, I just had to go, and, since it was the day before her birthday, I brought my girlfriend Angie, too.

Jimmy’s No. 43 is a cozy little underground joint on the Lower East Side. We walked past the dimly lit bar and to the back room, where there were a few small tables surrounding one long wooden communal one. The beers to be paired with our dinner were proudly displayed on the bar, which was dotted with small candles. We were a little early, so Angie grabbed us a Barrier Bumble Wheat (8%abv) while I chose our seats at the communal table. 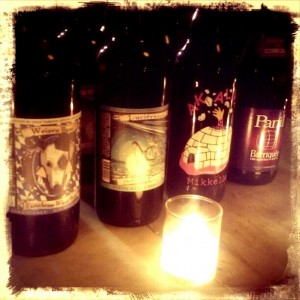 I’ve noticed most communal table situations begin much like an experience in a cafeteria: everyone starts off talking to their own clique. Unlike a cafeteria, however, when these situations involve alcohol, most cliques tend to break down and conversation begins to flow across the table. When our host B.R. came out to talk about the first course, we were all still deep in cafeteria mode. B.R. works for the importer sponsoring the beer dinner: Shelton Brothers, three brothers and their friends who import primarily small-batch beers, and do so with a deep sense of tradition. The beers imported by Shelton Brothers tend to be unsweetened, unpasteurized, and slow-fermented. The wild yeast and sour beers they chose for the dinner came from such small batches that the first course pairing had to be swapped from Beersel Blonde to De Ranke XX because there weren’t enough cases of Beersel left to supply the entire dinner.

Our first course: whole grain toast with garlic and sea salt butter paired with De Ranke XX Bitter Belgian IPA (6.2%abv). I’ll admit, left whole the toast was a little unwieldy, but I would roll that in 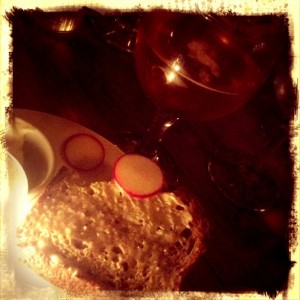 garlic butter. The radish added a nice peppery pop on top. While we nibbled, B.R. told us that De Ranke began as home brewers who started a brewery in 1994 in an effort to return to traditional methods and create beer without the stereotypical sweetness characteristic of Belgian ales. The XX Bitter was definitely hoppy with a low carbonation and a hint of brettanomyces. The “bret,” B.R. said, was added on purpose and gave the beer a funky little farmhouse note.

The toast and De Ranke had started quite a few cross-table conversations. The bubbly blonde to my left and I chatted about the radishes and Union Square Greenmarket (which is where Jimmy purchased all the produce), while her husband subjected the polite woman next to him to a flavor analysis of the pairing. When B.R. came out to talk about Round 2, she had to do quite a bit of shushing, at least until the food hit the table. Weisen Bam Beire Saison (4.5% a.b.v.) from Jolly Pumpkin Artisan Ales paired with a salad of bright, crisp yellow and green string beans, radishes, and pickled onions. The lemony notes in the saison complemented the acidity of the salad—I’m a sucker for a good string bean. The Jolly Pumpkin brewery uses open fermentors for their beer (to encourage wild yeast strains to flourish) before aging it in previously used wooden barrels. The Weisen Bam happened to be their summer seasonal, named for their dog, Bam. 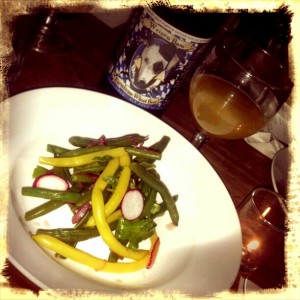 By the third course the blonde had become an integral part of Angie and I’s conversation on creating fall cocktails and interesting margaritas. She had also taken it upon herself to help me arrange the plates and beer for my pictures. Her husband, on the other hand, muttered into his glass about how every pairing was wrong because of the nuances and spice notes of the beers. If you go into every situation looking to pick it apart, you’ll certainly find something amiss, but dude, the dinner is called “Vegetarian Nonsense”! Sure, sometimes I want to dissect everything in a beer to learn from it, that’s not about enjoyment—it’s work. Great beer isn’t made to be dissected, it’s made to be enjoyed and shared: to start conversations, not be the star.

This course reminded me of fried rice, sans egg: farro and corn risotto with diced peppers and carrots. It wasn’t creamy like risotto, but it was pretty tasty. Personally, I think it could have used the egg. The “risotto” was paired with another offering from Jolly Pumpkin: Luciernaga Belgian Pale (6.5% a.b.v.). The Luciernaga, or “Firefly,” is a special-release beer and has been aged in barrels previously used for white wine. Hints of grains of paradise and coriander hit you with each sip, followed by earthy, funky hop notes. 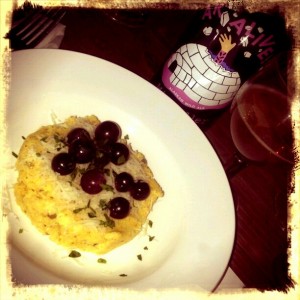 Jimmy’s “Polenta con queso and Concord grapes” looked rather cute when it hit the table. I enjoyed the sweetness of the grapes against the bite of the Parmesan, but the texture of the polenta reminded this Florida girl more of grits than anything else, and the absence of sauce just made the dish feel incomplete. Jimmy happened to be standing by me when this course was delivered, and I heard him tell the server the kitchen was supposed to roast the grapes and make a sauce, not use them whole for garnish—I guess someone forgot to tell them. Our beer for this course came from a collaboration between Mikeller gypsy brewery in Denmark and Anchorage Brewing in Alaska. AK Alive (8%abv) is Mikeller’s tribute to one of my favorite Trappist Ales: Orval. It has nice wild, farmy notes with hints of hop and brettanomysis and was my favorite beer of the evening.

I’d been looking forward to dessert all night, and the apple tart did not disappoint. The crust was nice and crumbly, the apples were still a little crisp, and there was just enough cinnamon and brown sugar to make it taste like fall. B.R.’s final beer selection had nice red-wine notes that, in my humble opinion, really highlighted the acid in the apple. Panil Barriquee Flanders Red Ale (8%) is a Belgian Style Italian ale, and it is indeed aged in red wine barrels for six months. According to the blonde’s husband this course was “by far the worst pairing,” but I’m pretty sure even the polite lady next to him was ignoring him by this point (his wife sure was). I’m not going to lie, I annihilated that apple pie. There also happened to be extra beer in the Panil bottle, which Angie and I were more than happy to consume.

Kids, I wish I could say my night ended here. It would have been the responsible, intelligent thing to do. But hey, it was Angie’s birthday at midnight, and I hadn’t hung out with Jimmy since August, when we recorded a spot for his web radio show at Belgium Comes to Cooperstown. We tipped our server and moved over to the bar for, you guessed it, more beer. Next thing we knew, Jimmy’s No. 43 was closing around us, and we’d made our way through the better part of the draft list while Jimmy expounded on his love for the fall and the sense of hope and change the season brings. The man was downright poetic: “The fall is our time,” he said. “It’s the city’s season.” I felt compelled to have another Thornbridge smoked porter and toast him. Work the next day was painful, to say the least.