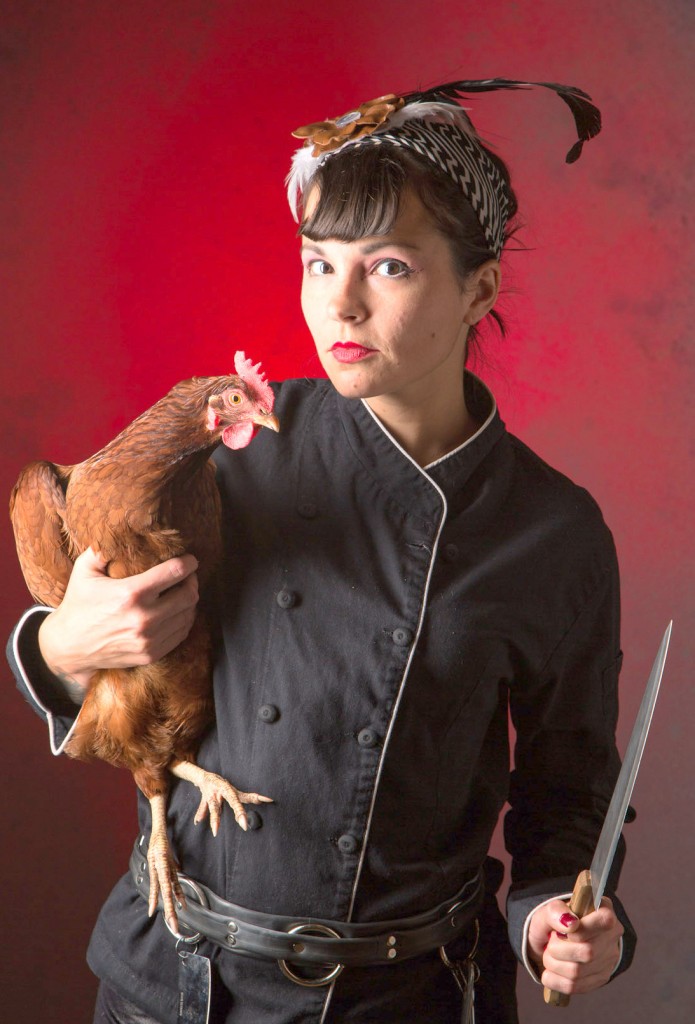 From Fremont to Pioneer Square, from the International District to Washington Hall on the fringe of the CD, the Cafe Nordo players have found novel ways to tell their stories. A tribute to the Twin Peaks TV series; a nostalgic look at air travel; a parody of Gunsmoke-era westerns. The satire is always pointed squarely at big business, big government, big agriculture, easy targets for Podgorski’s sharp pen.

The runs are short (24 performances), the seating limited. “You have to be in the know,” says Brindley, who directs the shows. That doesn’t mean they wouldn’t like a permanent home, though they don’t need anything as fancy as the Spiegeltzelt that houses Teatro Zinzanni. A foothold, a toehold, even, would do; ideally a space with a commercial kitchen.

So say hello (and goodbye) once more time to Henrietta, the Modern American Chicken Deux. She’s hatched, raised, dispatched, salted, stuffed, roasted and devoured in the course of the latest production of the latest Cafe Nordo production, a delightful evening of comedy, music, wine and good fun that’s well worth seeing during its limited run (through Nov 24th, at Washington Hall). Of particular interest: the invocation which starts the evening: “We thank you, Salt, for making this Henrietta we are about to share so tender and moist. Blessed is free glutamate …” and so on.

The chickens are Kosher and free run; they need the salt brine to become soft and juicy. The script is minimalist and heartfelt, the musical accompaniment (by Annastasia Workman) a running delight, and the actors (Opal Peachy as the sous-chef, Maximilian Davis as the Maitre d’, and four servers who double as “guides”) carry out their duties with aplomb.

The evening gets underway with a glass of sparkling wine, and continues through five courses. The action begins on a farm, as Henrietta is born in a field of bright green grass scattered with dandelions. She lies in a soft ocher nest beside a speckled brown shell. As she grows, Henrietta scratches amongst the dirt and leaves. No sawed-off beaks, no boxes or wire, no chemical needles. But nothing lasts forever. And so, on a Wednesday morning, she is removed from her coop and taken to the barn … and, before long, this beautiful animal is brought to the table.

“Chef Nordo” originally refused to make any concessions to vegetarians, but eventually relented. Henrietta now has a little chick-pea sister, Greta Garbanzo. But the menu—and the wines—revolve around Henrietta and her short, happy life. “We would love to have you in our restaurant,” the fictional Nordo writes to the non-carnivorous playgoers, “and will toast your discipline while we lick chicken grease off our fingers.”

Technically, Chef Nordo was stabbed to death (offstage) in the Twin Peaks satire, Somethin’ Burning, but his presence is still felt. The shows 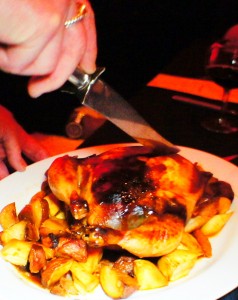 have a homespun lack of pretense; their characters remain resolutely in character, even during breaks. The scripts regularly assail the soul-destroying purveyors of fast food even as the performers double as waitstaff. Brindley and Podgorski nuzzle right up to the line of self-parody but don’t cross it.

You shouldn’t come to Cafe Nordo expecting haute cuisine, but it does rise to the level of good, neighborhood bistro fare. There’s an opening shot of pureed parsley, followed by a poached egg in a basket of shredded Parmesan, then a dumpling in chicken broth (poured with aplomb from watering cans) before Henrietta herself arrives, fork-tender, stuffed with handmade chicken sausage and habanero cherries. Along the way, you’re treated to several glasses of decent wine (Blanquette de Limoux, a white, two reds, a sparkling muscat). The chickens are roasted in Pioneer Square (in The Kitchen at Delicatus) and driven up the hill to the theater. It’s not ideal, but it works. Podgorski and Brindley dismissed out of hand an offer by a local “chicken manufacturer” to provide free product in exchange for a promotional mention. Instead, Cafe Nordo will pay full price to a small local farm, because, they say, “that is our message.”

Cafe Nordo tickets online at Brown Paper Tickets, where you can easily see pricing and availability for the remaining dates, with or without wine flights, as well as vegetarian options.