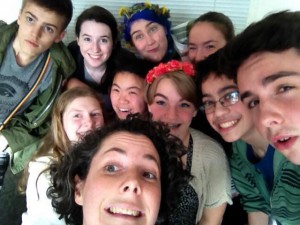 How do today’s teens become the next generation of urban art fans and event-goers? TeenTix is easing the way in Seattle. Founded in 2004 by Seattle Center and in partnership with 10 arts organizations on its campus, it draws teens away from smartphones and into venues to experience symphony, opera, ballet and film.

What’s their secret to success? TeenTix members shared insights with Brown Paper Tickets on how to nurture and engage future generations of culture consumers. Aside from their heavily discounted teen event pass, there’s more to learn.

1. What attracts teens to arts events and to arts involvement?

According to TeenTix members, already being a part of some form of art or performance activity at school seems to be key in attending arts activities outside of school. As well, the reduced price of tickets through TeenTix is crucial for helping students find arts participation accessible. In their words:

“I think being part of some form of art at school (such as being in band, orchestra, choir, art class, etc) has a significant influence on attending art events outside of school.”

“I aspire to one day be a stage manager so I like going to plays to see a good story and observe how the show is tech-ed.”

2. How does social media influence teens to attend arts events?

TeenTix members agreed that social media is key for learning about and sharing arts events. Part of the fun and motivation for attending is in seeing what arts organizations others have “liked,” or which events friends are headed to. In their words:

“Almost all teens are on Facebook so when you see an event being promoted on Facebook, you are more likely to tell your friends and kind of show off that you are going to something that looks cool!”

“Not only is [social media] an effective means of spreading the word about the event, it also is a way to see which of your friends are going…”

3. How are today’s teens different from their parents’ generation in what they look for in music, theater, dance and more arts?

These teens don’t necessarily feel that different from their parents, except that they think today there may be more affordable and accessible options for getting involved with the arts. TeenTix members shared that they look for art and music that reflects their world. They also admitted they like faster-paced everything: music, dancing and connecting. These teens reflected what would seem to be a fairly universal teen perspective: technology has added a dimension to how deeply they can go with arts participation, and who they can share their experiences with. One student, however, did point out that smartphones are not something that every teen has access to. In their words:

“As for exhibits, technology has expanded the possibilities, and also raised the bar for this generation. Many teens seek out interaction, ways that they can manipulate something to better understand a piece, without altering the original.”

“I think a growing number of arts events for teens are aimed at including this technology, because they assume that it’s commonplace. As someone without some of these tools, I sometimes feel isolated from an event.”

4. What is the most successful thing TeenTix does to overcome barriers for teens to become arts fans in Seattle?

It really does boil down to money, according to the students surveyed. In their words:

“The biggest barrier for us is money. That’s pretty much it. I’ve had friends who didn’t care about art but then I told them about TeenTix, they started going to art events a lot!”

“Many of my friends are dissuaded by high ticket prices, especially for the symphony and the ballet, even if they are very interested in a particular performance. (It’s probably not much to adults, but when you add up costs for tickets, gas, parking, food, etc., it adds up, and most of us teenagers make minimum wage.) $5 is AWESOME, so it encourages sharing the news of getting a good deal with friends.”

5. Has your time with TeenTix influenced your life or career?

While most teens interviewed didn’t think they’d necessarily be heading into the arts as careers, they agreed that participating in TeenTix had been a big influence and opened new worlds for them in the arts. In their words:

“My time with TeenTix has definitely influenced what I would like to do after college. I am currently interning for the Seattle International Film Festival, learning what it is like first hand to be a programmer and organizer for one of America’s largest film festivals. I am currently pursuing a major Communications and I hope to find a job as a programmer for a film festival or an entertainment critic.”

“Being involved with TeenTix Press Corps and experiencing different mediums of art has definitely broadened my horizons and encouraged me to do something in the arts/humanities. It’s nice to be encouraged to go into this field, when school is all about STEM fields, and only STEM fields.”

“The Glenn Miller Orchestra concert was very inspiring, and I even had the chance to talk to the band leader, who apparently had a masters in classical piano! I thought that was a cool connection we had because I’ve been playing classical piano for almost 9 years…”

Seattle’s TeenTix is helping arts organizations connect with young audiences and empowering teenagers to engage with the arts on their own terms. Arts event organizers across the globe are likely thinking about how to reach and serve the future generations of their audiences. Perhaps the TeenTix early outreach and ticket accessibility program can be an inspiration.