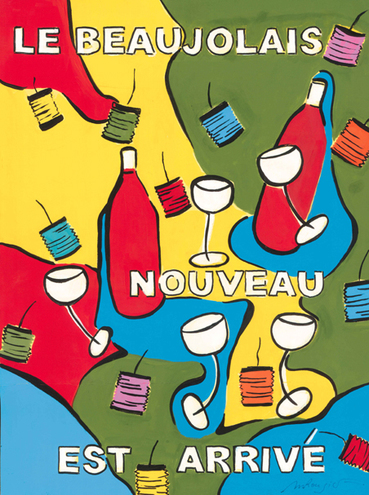 The Francophiles out there will know this, but for the uninitiated this Thursday is Beaujolais Nouveau Day. Beaujolais Nouveau is a red wine made from Gamay grapes in the Beaujolais region of France. It is a vin de primeur which means that it’s a French wine that the Appellation d’origine contrôlée (AOC) has allowed to be sold within the same year that it’s harvested.

There’s been a long-standing tradition in Beaujolais of producing a vin de l’année to celebrate the end of the harvest but this was largely a local tradition until after World War II. In 1951, the AOC relaxed restrictions that said the soonest Beaujolais wine could be sold was December 15th. They pushed the release date up to November 15th and Beaujolais Nouveau was born.

Beaujolais Nouveau is a purple-pink wine which is bottled a mere 6 to 8 weeks after harvest. The result is a young, fruity wine with mild tannins that’s meant to be served slightly chilled and drank immediately. While many wine connoisseurs consider Beaujolais Nouveau to be simple and immature, it’s an excellent early indicator of the quality of that year’s wine harvest and provides an opportunity to enjoy wine while it’s still fresh and fruity.

Here are the details for our featured Beaujolais Nouveau events happening this Thursday, November 17. Just click on the event titles to go to the ticket page:

La Fête du Beaujolais Nouveau – Milwaukee, Wisconsin  La Fête du Beaujolais Nouveau celebrates the French release of the new harvest wine and the worldwide race to be one of the first to taste this year’s harvest. L’Alliance is excited to have Marcus Doucette of Radio Milwaukee entertaining us for the evening, while you enjoy George Duboeuf Beaujolais Nouveau, which will be poured by Matt Munson, a Duboeuf insider, and ‘Taste of Milwaukee’, featuring favorite French dishes from some of Milwaukee’s best restaurants, including La Merenda and Le Rêve! While you enjoy the food and wine, make sure to check out local artists, who will be painting live both on canvas and off, provided by ART Milwaukee.

Celebration of Nouveau Day & Book Signing – New York, New York  By French law, the third Thursday in November is the official release of Beaujolais Nouveau.  Toast Nouveau Day and the publication of THE FOOD LOVER’S GUIDE TO WINE by Georges DuBoeuf and “Wine Book of the Year” award-winners Dame Karen Page and Andrew Dornenburg with Georges DuBoeuf’s 2011 Beaujolais Nouveau and 2010 Beaujolais Crus.   The wines will be complemented by hors d’oeuvre from Chef Robert Gurvich of Alison Price Becker’s soon-to-open Alison Eighteen.  Ticket price includes a copy of the book, which the authors will be happy to sign.