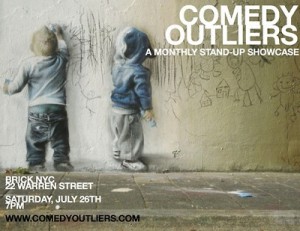 Guest post by Brandon Collins and Mike Brown of Comedy Outliers. They offer advice to comedians and performers on how to survive and thrive in today’s competitive artistic climate.

A few years ago, when we were producing one of our first independent comedy club shows we were asked by a comic performing on my show, “So since you’re charging a cover how much am I making for my set?” At that time we were so ignorant to the business of stand-up comedy, we had no idea what they were talking about. But after speaking with some veteran comics whose opinions we greatly respected, we came to learn that the common rule of thumb with comedy shows is: if you charge a cover, you SHOULD pay your talent. Of course there are some show producers that don’t follow that rule and some comics don’t expect to get paid for every bit of stage-time. This is because stage-time and money are both valuable to a working stand-up comic. When we ran our “Comedy Outliers” show without a cover, there was never any expectation to pay our comics with anything besides a free beer and a sincere “thank you” for their time and talent. The only comic we would pay during that time was the headliner as they were usually a highly regarded comic who had several credits and added a certain amount of hype to help build the “Comedy Outliers” brand. We would pay for these comics out of pocket, which became expensive after nearly two years of being an entirely free show.

One of the main reasons we began charging a cover (we try to keep it as affordable as possible btw, use discount code “Summer” for $5 tickets) was because we wanted to be able to pay ALL of our performing comics. Another reason was to build the brand through better podcast equipment and merchandise, but we can only continue to produce great shows and content if we have exceptional talent. By creating a budget as producers and knowing our limits in what we can pay for talent has forced us to produce a much tighter show that provides a high quality experience for our audience. It is important to remember as producers that your talent needs to feel like their time and talent is being appreciated. When we were just a free bar show, the performing comics were just happy to be in front of a great crowd that was both diverse and energetic. Now we can offer that pay them for their time that they could’ve spent at another show. This has helped us build a stronger relationship with the comedy community in NYC that we love so dearly. They are always appreciative of the gesture and that’s a great feeling to have as a show producer. Keep that in mind when you produce your new show…spread the wealth!

Comedy Outliers’ next show is at Brick NYC (22 Warren Street) on Saturday, July 26th at 7pm. The show has a $10 cover with no drink minimum. Pay only $5 for advanced tickets if you use the discount code “Summer” for $5 tickets! You can also support their efforts by hitting the “Donate” button on their website or by listening to their weekly podcast.