Q + A: Vivienne Fuego on The Golden Poppy Revue 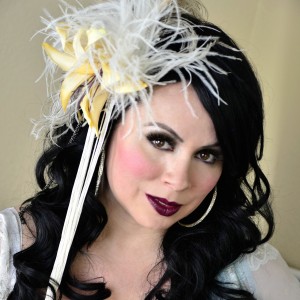 We interviewed Vivienne Fuego, founder of Sacramento’s newest revue, The Golden Poppy Revue to find out how she got involved in burlesque, the challenges with her new endeavor and what audiences can expect to see at the Golden Poppy’s upcoming debut production. See “L’Amour—An Evening of Valentease,” Saturday, February 28 at the Colonial Theater in Sacramento. Tickets available here.

Before The Golden Poppy Revue, Vivienne (then called Raven LaRoux) founded the Bodacious Bombshells, a burlesque troupe with a “rock and roll edge” in 2012. The Bombshells dissolved in 2014 and Vivienne vowed to retire from producing and performing. After only a month into her retirement, she founded The Golden Poppy Revue, a bi-monthly production at Sacramento’s historic Colonial Theatre, featuring six former Bombshells as her core cast: Jenna Jezebel, Sugar Cheeks, Violet Ruthless, Dahlia D’Vine, Bella Blue-Eyes and Lady Grey.

Tell me about your burlesque history. How did you initially get involved and who were some of your early inspirations?

I replied to a notification in November of 2012 to a Meetup event that the founder of the Darling Clementines set up. I went to the Meetup and met with a great group of gals. ChaCha Burnadette led a discussion of all things burlesque to gauge our interest levels. She then organized Meetups that had us venturing out to a few of the shows of the Sizzling Sirens (Sacramento’s longest running troupe). I was mesmerized. Absolutely hooked. I knew right then that this was what I had to do with the rest of my life. Being that I have a background in dance and theater, it seemed like a natural fit. I auditioned for the troupe in early December and was happy to have been accepted as a member.

My first burlesque inspirations were definitely Ginger Valentine and LouLou D’Vil. Their classical style resonates with me.

What are some of the challenges you’ve faced starting this new endeavor, “The Golden Poppy Revue?”

Some of the challenges I’ve faced in starting up the new endeavor were securing a venue (a big one for any producer), setting dates for the 2015 season (there always seems to be conflicting events on the weekends where we risk splitting the fan base numbers), and helping my core cast get up to speed on expectations and production style. Even though there have been a few growing pains, this has been the most easy and natural fit for us all. We gel so well and are very loving and supportive of one another.

What can audiences expect at your upcoming show “L’Amour – An Evening of Valentease?”

Our audiences can expect, simply to be wowed. This is the revue’s debut show and all of our cast members and special guests are abuzz with anticipation. We have both a VIP Experience and The Main Event as ticketing options. Main Event ticket holders arrive for the main show at 9:00. However, those that purchase the VIP Experience tickets will be privy to an exclusive pre-show earlier in the evening from 8:00 – 8:30. They also get to sit in the best seats in the house: the first three center and front rows. And they get to take home a keepsake from the event.

Thank you for opting to take part in Brown Paper Tickets’ Burlesque Hall of Fame donation program. Why do you think it’s important for burlesque producers to support BHoF?

It’s important to honor our founding mothers and fathers. Without those ladies and gents who blazed trails for us, we wouldn’t have this beautiful, titillating, inspiring art form. It’s also such an easy way to help raise funds to support the museum in Vegas–$0.35 gets added to each Brown Paper Tickets order. I’d say it’s a small price to pay to support something so critical.

Have you been to the BHoF Weekender? Any good stories?

I attended the Weekender back in 2013 and am happy to say that I will be going back this year. I served as an Escort to one of the Legends in ’13 and it was the most wonderful way to volunteer and network … I’m hoping to serve in that same role this year as well.

Do you have advice for burlesque artists thinking of producing their own revue?

I never produced until I was in my early 40s; I only performed. However, I grew up in the dance and theater worlds, so being immersed in those throughout my younger years has been a huge plus. Producing was a very natural next step for me. I would tell anyone thinking of producing their own revue to go to shows. See what’s out there and make an assessment of the types of productions. Brainstorm and figure out how you can create a show that is uniquely yours and different from all other local productions. Take as many burlesque business classes as you can at BurlyCon, The Great Burlesque Expo, etc. Get yourself a few producer mentors (mine are Bunny Pistol and Fever Blister). And as always, network, network, network.