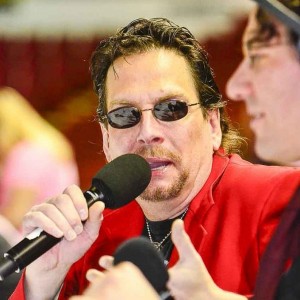 By now, I hope your league knows its best marketing tool: announcers.

This blog is not self-indulgent nor written to over-justify the role of announcing. It’s to dispel the myth that announcing isn’t all that important. I am going to tell you how a lack of good announcers can hurt your league, what good announcing looks like, why “borrowing” announcers isn’t the solution and one way to try out announcers.

What Happens When You Don’t Develop Announcing

A heck of a lot. Six things that could happen if your announcers are underdeveloped or do a poor job:

1. The crowd disconnects from the game. Announcers connect the game to the crowd. Don’t downplay this idea. If you do, please ask someone to kick you. Kicking yourself is totally ineffective. I’ve tried. Takes balance. Doesn’t leave a mark. ‘Nuff said.

2. Nobody knows who you are. The crowd may not know your name or it may be pronounced incorrectly, enunciated poorly, or purposefully “played on” all night. For example, imagine the horror of fans yelling, “Lyin’ Fart” instead of “Lyin’ Heart.” And heaven forbid if the league’s name is never mentioned.

3. The game remains a mystery. The crowd has no idea what’s going on.

4. Spectators will not return. If spectators leave not knowing anything about the game, league or skaters, odds are they’ll never return. Spectators are one-timers while fans come back. Sure, you get their money once, just not twice. Spectator and fan retention is at an all-time low.

6. Sponsors will not renew. Let’s just say, solely as an example, your sponsors never hear their names (I know, that never happens). Worse yet, the name was pronounced incorrectly or used as part of a “harmless” comment. (Now I’m swinging with full sarcasm.) But it’s important. You lose revenue and the goodwill of a local business.

“Bob, What IS Good Announcing?”

I’ll forever feel strongly about my time with the Mad Rollin’ Dolls, ten years go. Our co-founder understood the importance of announcing. The league absorbed Baam Baam, my highly esteemed co-announcer and me. We had roles within committees and league operations open to us, and I loved it.

Based on my routines and ideas adapted from announcers all over the world, here are three ways I define good announcers:

1. They come prepared. It takes me 8 hours to prepare for Brewcity league night. I compile all the information into one document with everything in the evening’s timeline. Rosters, order of introduction, the charity (including what they represent), team records, standout statistics on skaters, every sponsor (with reads, not just names), names of staff, the entertainment for all three halftimes, upcoming games and appearances. I also add news regarding the travel teams, groups in attendance, anyone we should thank and even the name of our national anthem performer.

Having all this prepared and in order of flow means Doc (my co-announcer) and I rarely miss anything.

2. Good announcers not only know rules, they know the officials’ hand signals. Every announcer should know these. They can be found as rules appendix at the Women’s Flat Track Derby Association. Knowing the signals allows announcers to explain the infraction.

3. Great announcers explain the game. There is so much focus on explaining what skaters can’t do (fouls), it can overshadow explaining the game. Explaining the game can be done without coaching from the mic. Early on, announcers were hounded about knowing skater names, rules and penalties. I realized we were leaving out why the skaters did certain things: basic dynamics and strategy. Since then, most of the compliments I receive from fans go something like this, “I learned so much about the game.”

Announcers with great emcee skills own the crowd. By pitching what’s next, keeping excitement levels high and entertaining the crowd, people are less likely to leave early and more likely to return. Plus, they always push merchandise, another under-utilized profit center I’ll cover in an upcoming post.

How Announcers Learn the Game 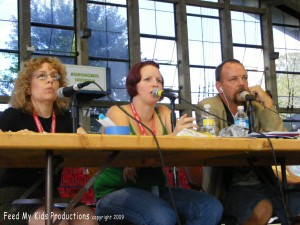 I have a saying, “You can’t announce what you’ve never seen.”

If you close practice to your announcers, how on earth do you expect them to reach their potential? It’s impossible. An announcer’s ability to learn the game relies on the league. I’ll defer, again, to the Mad Rollin’ Dolls who gave me total access to practice. In fact, coaches allowed us to step onto the track as they were teaching skating techniques, moves and strategy. I would never have known nor continue to dig into the game if not for that experience.

“Bob, we solved the issue. We borrowed good announcers from up the road.”

Here’s where criticize my own. Most dedicated announcers work for too many leagues. They love it, find more opportunities and hone their skills. So why am I being critical? It’s OK for a while, but it hurts the growth of the overall announcing pool. They take the place of others who should be developed. Eleven years later, I bet the sport still does not have enough accomplished announcers to permanently staff half its leagues.

Borrowed announcers are not yours. An announcer’s home league takes priority. If your game conflicts with the home league, you’re stuck.

Worse, after years of travel, many burn out and stop. Remember, they don’t have a travel budget either. They love you; you show them more appreciation than their home league, who is used to their excellent self (yes, that’s a “Bill and Ted” reference), but you will wind up back at square one.

My rules? I only do events for my home league (Brewcity in Milwaukee), and will help Madison on occasion (my first league and in my backyard). Otherwise, I will only announce for a league if it’s their first-ever bout or if they have dedicated announcers to train. I will arrive early and talk about roles, bring them training materials, work with them that night and be available to mentor at any time. This way, I’ve fixed the issue, not contributed to the problem. 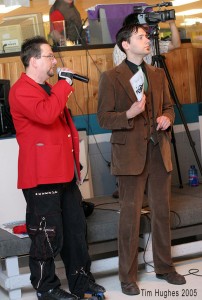 Don’t give the job to anyone, not even dedicated league members. Every role has a different skill set. Advertise on social media, your site and even in the newspaper. Have tryouts. Be creative.

One of the more popular ways is to get the league together for a night at a sponsor bar. Bring in a DVD of a recent bout and give every applicant a set number of minutes, or jams, to call the action as they see it. It’s not about accuracy; it’s about how quickly they think on their feet. Hand them some sponsor reads to throw in between jams. You can teach them the game later; just make sure they have the skill and personality first.

Make sure every new announcer understands the rules. Download the WFTDA/MRDA rule set. The Association of Flat Track Derby Announcers (AFTDA) also has some helpful material, including the official Announcer’s Handbook (an invaluable resource), which can be downloaded from the front page. It provides an expected code of conduct, and the forums are a great place to learn of upcoming events, to ask questions and keep up with derby changes. They also certify announcers, a requirement to work major WFTDA events.

If questions go beyond that, simply contact me at bob [at] brownpapertickets.com

Bob Noxious is a Doer specializing in roller derby for Brown Paper Tickets.