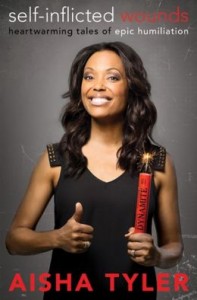 “I am not a psychologist,” Aisha Tyler writes, “but I do know some sh*t about people.” In her new book, Self-Inflicted Wounds: Heartwarming Tales of Epic Humiliation, Tyler uses her own experiences to discuss the human experience at large, writing in great detail about some of the most traumatic events of her life. The caveat, though, is that the 30-something events Tyler discusses are all of her own doing. These self-inflicted wounds, Tyler relates, made her the person she is today—someone who embraces her own failures and shortcomings in order to learn from them. They hurt in the moment, Tyler acknowledges. In fact, they burn “like a mouthful of napalm on an empty stomach.” But they also “forge character. They burnish your edges and make you the person you are.” And for that, it’s imperative they are examined.

What’s always interesting about comedians writing books is that the dynamic between them and their audience shifts greatly: it becomes more direct, less inferential. The stories, themes and ideas comedians previously discussed onstage are now indelibly preserved in black and white, often translating what was a therapeutic art form for themselves into what amounts to a self-help book aimed squarely at the reader.

To this end, Self-Inflicted Wounds is indeed a self-help book. Throughout Tyler’s recounting of these formative events, she constantly harkens back to her central message without channelling Wayne Dyer and piling on the faux-wisdom or fronting as some self-endowed authority on the subject. Yet by ripping herself apart and putting her insides on the table for all to see, Tyler helps tear down the obstacles that prevent us from doing the things we want, and from investigating ourselves the way we must in order to evolve.

When Tyler writes about her vegetarian upbringing and how she attempted to trade lunches with classmates as a child, she cuts through the potential self-indulgence and gets to the underlying point: “meat represented something more than just a food-stuff. It symbolized my desire to fit in.” When she reflects on having been bullied, she shows true growth: “I couldn’t control the fact that I was tall, or odd, or a nerd, or a creepy loner, but I could control the level to which I allowed my tall, odd, nerdy aloneness to be weaponized.” And when she discusses initially trying stand-up comedy, she encapsulates her book’s central message: “bombing so hard you get a bruise on your ass is the only way you get funnier. We learn from our mistakes.”

As Tyler writes in the preface, she penned Self-Inflicted Wounds explicitly to help others. Some might view Tyler as overstating her message at times; others might believe she strikes the appropriate balance between self-examination and profundity. Either way, Self-Inflicted Wounds is, at the very least, a breezy read that’s consistently funny without ever feeling forced or wanting. Tyler’s clearly grown to know herself, and if one is accepting of her perspective, he or she might receive some benefit, as well.

Can’t get enough of the written comedic word? Check out:

Saturday, July 13 I Lee Camp Live at the Gold Room  Portland, Maine  Camp’s popular Moment of Clarity web series has evolved into a book, and now, full length show with a full, grassroots funded 1st season beginning this fall! He has been a featured guest on many shows including: Countdown with Keith Olbermann, Viewpoint with Eliot Spitzer, ABC’s Good Morning America, BBC’s Newsnight, and RT’s Breaking the Set. His comedic writing skill has been lent to The Huffington Post and The Onion, and he was a featured performer at the 2008 Democratic National Convention.

Friday, July 26 I Mick Foley: Tales From Wrestling Past Comedy Show  Corpus Christi, Texas  He’s a three-time WWE champion, a hardcore legend and a member of the WWE Hall of Fame. Now, Mick Foley is unleashing the same trademark blend of wit and wisdom, wildness and warmth that made his books so beloved (five self-penned New York Times best-sellers) into his one-man spoken-word stage show.