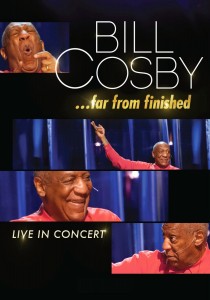 Comedy Central is a curious network. In its apparent effort to saturate the airwaves with as much stand up as possible, the comedy behemoth often puts up comics who aren’t TV-ready—comics whose sets either lack originality or are just plain unfunny. But every now and then the network makes a savvy decision, as it did in giving hour-long specials to underappreciated veterans like Kyle Kinane and the late Patrice O’Neal. Even in those moves, though, Comedy Central aimed for its target demographic: young men. So dedicating time to a 76-year-old who doesn’t curse and is best known to millennials for other people’s impersonations of him, rather than his actual comedy, could be considered a risky proposition.

But that’s what Comedy Central smartly did, bringing Bill Cosby back to TV for his first special in 30 years. Filmed in Cerritos, California, Far From Finished runs more than an hour (the CD version is more than twice that) and finds Cosby mining a topic that doesn’t readily seem resonant with younger folk: marriage. Married for almost 50 years, Cosby plays the role of the elder statesman, seemingly knowing all the answers. But, like the comedian he is, he listens to none of them. His wife still tells him what to do and he still screws up. In many ways, Cosby is resigned to the fact that this is what marriage is, and there’s no use in fighting it. His role, as he sees it, is to tell us what we’re in for.

To that end, for those who have been loyal devotees of Cosby’s brand of clean, inclusive comedy, Far From Finished is another fine entry in a distinguished body of work. That said, it’s difficult to envision young, sex-crazed men who thirst for the word “fuck” every punchline running with open arms to Cosby’s newest special. Yet they should. Or at the very least, they should give it a chance. Far from Finished is by no means Cosby’s finest hour, but it’s certainly light-years better than the average Half Hour special.

The central reason why is simple: Cosby is a brilliant comedian. He has a signature voice and style and he knows how to shine new light on broad subjects. When, for example, he breaks down what happens when a girlfriend transitions into a wife, he coats every line with the same measured patience he’s always had, sitting in the pauses to build anticipation and deliver heightened laughs. More impressive, though, is the amount of actual time Cosby is able to milk from the subject. It’s not all gold—nor is it all revolutionary—but it is expert.

Cosby’s perspective might be viewed as dated, his tone not powerful or outlandish enough, but what cannot be argued is the command he still displays—the spell he’s able to cast over an audience, the level of attention he demands. If Far from Finished proves one thing, it’s just that: the man is still a comic, and he’s still worth paying attention to.

For more great comedy shows with an emphasis on storytelling, check out:

Monday, December 2 I Perfect Liars Club – Washington, DC  Four storytellers tell you a story. Three are true. One is a pack of lies. Listen. Interrogate. Vote. And then brace yourself for the shocking truth. Can you spot the liar?

Thursday, December 19 I RISK! – New York, New York  RISK! is the show where people tell true stories they never thought they’d dare to share in public stories they’d normally tell close friends. The brightest stars of TV, film and literature have dropped their usual act and shown a side of themselves we’d never seen at RISK! Hosted by Kevin Allison of The State, RISK! is also a free audio podcast getting hundreds of thousands of hits each month.