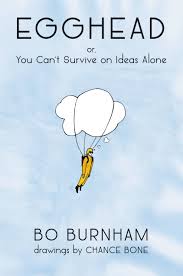 The most informative bit in Bo Burnham’s book of poetry, Egghead: Or, You Can’t Survive on Ideas Alone, comes at the end in the acknowledgments, in which Burnham thanks George Carlin and Shel Silverstein. Both had a deep appreciation of language and love for playing with it, a quality Burnham shares. Both also enjoyed decidedly adult material, as does Burnham. That’s how Burnham winds up with a collection that includes a contemplation on the shock of empathy (“The Party”), what could be the start of a science-fiction novel (“Xia Cobolt”), and a meditation on crapping philosophers (“Socrates”).

Some of these have found their way into Burnham’s act—he will randomly pick up a notebook and read a couple before tossing the book over his shoulder and resuming his regularly scheduled act. Those have been the more silly and scatological in this collection, and some readers might be surprised at Burnham’s depth. “Clever” and “earnest” are two dangerous words in comedy. Both make people suspicious. Clever can seem like empty verbal gymnastics. Earnest can equal bland. That’s if they’re employed incorrectly, and they can be tricky to do right. Burnham does both, and he does them well.

In “Magic,” Burnham asks the reader to “Read this to yourself/Read it silently/Don’t move your lips/Don’t make a sound.” Then he asks to make some parts louder, some parts softer, and to read some parts in a “crotchety old-man voice.” It’s an irresistible bit of goofiness, and difficult to not play along. Sometimes he simply tosses words out that shouldn’t fit together, as in “My Daughter:”

slaughtered the fresh water otter I bought her.

He cops to that later on “Strange Adjectives:”

with my strange choice of adjectives.

with your muscular teeth and clockwise vagina.

But there are a handful of quite serious or introspective poems that punctuate the silliness and absurdity. They are little anchors, keeping the collection from drifting off into the fanciful. In “Stars,” he contemplates the celestial bodies and admits, “I still can’t conceive/that they’ll carry on gamboling/after I leave.” Similarly, there are lines in whimsical poems that ground them. In “Her Eyes,” he compares a woman’s eyes to fire, but not fire’s color or heat. It’s more that “they had that strange blend of /familiar and miraculous – /and they were always nice to look at/after a long day of doing things.”

Egghead evokes Silverstein in its playfulness, a trait enhanced by the illustrations of actor/musician Chance Bone. Bone adds his own bits of absurdity with his simple but stylized ink drawings. Some match the words literally; some don’t seem to have much to do with the words at all, yet still compliment them. At absolute worst, Egghead is a wonderful rainy-day diversion to lift the spirit. At best, it’s proof that Burnham is capable of entertaining with just his ideas on paper, away from the stage. Proof of a bright mind.

Friday, October 18 I Mass Laughs, The Comedy Buffet – Zack Livingston Presents… Mass Laughs, End of the Summer Showcase at The Elevens. Come to the Falling into Laughter show, featuring some of the best comics around, including headliner Andrew Williams, feature Kelly Morse, with Ryan Shanahan, Steve Yarbro, and your host Zack Livingston!

Friday, November 1 I Karin Sears Comedy Night at the Claddagh – A night of comedy to benefit the family of the late Karin Sears, who was always upbeat and always laughing. This fantastic show features Jim Lauletta, Dave Rattigan, Steve Bjork, and Katie Grady. Raffles and a cash bar add to the fun. Doors open at 7pm for the 8pm showtime.

Saturday, November 23 I Comedy on Elm Street – The laughs keep coming with another fantastic show at the Elm. This one features New England favorites Dave Russo, Mike McCarthy, Jessie Bickford, and Josh Day. The Elm is one of the coolest comedy venues in Massachusetts, with theater seating, great food, a terrific beer list, and tons of laughter! Showtime is 9:30pm. tickets are $15 in advance, and $18 at the door.