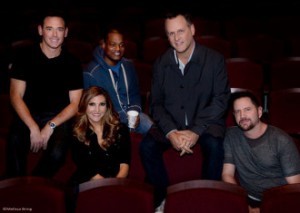 
The Clean Guys’ September 19 show at the Buell Theatre in Denver, Colorado, was broadcast to movie theaters nationwide, but it probably doesn’t herald the arrival of a major new comedy force. Coulier was joined by Jamie Kennedy, Andy Hendrickson, Heather McDonald and Ralph Harris, each of whom performed for about 20 minutes. And although they did keep swear words out of their acts, they didn’t shy away from more adult topics, including sex and drugs (“I’m not allowed to do any drug jokes,” Kennedy said before launching into a lame, dated medical marijuana bit). McDonald in particular seemed like she was constantly on the verge of saying something she wasn’t supposed to, and all of the comedians had their go-to replacements for the naughty words they weren’t allowed to say (Coulier was particularly fond of “flippin’”).

So maybe it was dubiously “clean,” but was it funny? Like any lineup of five comedians, it was hit or miss, with Hendrickson probably delivering the most actual laughs. Harris sweated his way through an opening set full of trite observations about the differences between men and women. That and other tired topics (Starbucks, airports) were common denominators. Harris joked about French people being rude and smelly; Kennedy about how polite the British are, right after a particularly insensitive (and not funny) impression of Japanese flight attendants that involved references to Godzilla and shrimp fried rice.

The whole Clean Guys moniker seemed more constraining than freeing for the performers, who mostly stuck to safe, boring topics instead of seizing the opportunity to explore something completely weird and different in the vast world of the non-profane. Even Hendrickson, whose bits about ostentatious weddings and pretentious foodies (“This chicken tastes like it used to be happy”) were often amusing, tread much of the same ground as his fellow performers.

Coulier opened his headlining set (which was only slightly longer than the others’) with Full House jokes, and his material was, not surprisingly, the most legitimately family-friendly. He spent a lot of time on “kids today”-type jokes about his video game-obsessed son, and trotted out his familiar Bullwinkle and Elmer Fudd impressions. Unlike Saget, who’s done everything possible to distance himself from the image of a sitcom dad, Coulier seemed ready to jump right back into the world of sanitized, hackneyed humor. He even ended with a series of musty one-liners (“What if the hokey pokey really is what it’s all about?”) that could have been right at home on his old show. Sure, they were clean, but that was about all they had going for them.

For more great comedy from performers who keep it clean, check out:

Tuesday, December 31 I Tim Cavanagh – Eau Claire, Wisconsin  Tim Cavanagh, a regular featured comedy guest on the nationally syndicated Bob and Tom radio show with TV credits including, HBO, Showtime and Comedy Central will bring his unique brand of comedy to Pizza Plus in Eau Claire.

Friday, January 24 I Just Pure Laughs – Petaulma, California  Dan McGowan has been performing his brand of clean comedy for years at The Laugh Factory, The Improv, and The Comedy Store to name a few. You may also have seen him on TV’s Last Comic Standing. This show is family friendly! All ages welcome!

Saturday, March 22-Sunday, March 23 I Scientist Turned Comedian – Minneapolis, Minnesota  A cerebral blend of stand-up comedy with science. Tim Lee is a comedian with a Ph.D. who’s become an internet sensation with more than 4 million views of his YouTube videos.