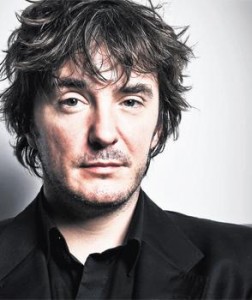 Irish comedian Dylan Moran drew a packed house at his Friday night Just for Laughs performance at Park West. Fans of the sardonic standup lined up around the block for the chance to see the creator and star of Black Books, who performed a generous set of close to two hours, including a highly demanded encore.

Despite the cheekily underwhelming, “Let’s do a show…or something!” kicking off Moran’s show, he quickly endeared himself by displaying a surprisingly keen grasp of Chicago culture and geography, and proving himself quite fond of the city with “buildings so big you have to drive around them.” References to Wicker Park and Logan Square (Okay, he called it Logan Park, but he still gets props for trying) and a clear appreciation for Chicago’s Italian beef/sausage combo were a welcome change from out-of-town performers who seem to not even know where they are.

Moran easily transitioned from talk of Chicago-style foods to a broader lesson that “most of the best times in your life are about putting things in your mouth.” This was a major theme of his first act, as he explored overeating, addiction and other urges that make humans tick. He sometimes meandered off topic, but usually seemed to rein himself back in to focus on the jokes. Moran even shared an excerpt from his 50 Shades of Grey-inspired novel, which contained the wickedly funny passage “She entered the room like a panther…a drunk panther, who was walking on her hind legs as a party trick.”

Following a quick intermission, or a “break-ette,” as he called it, he returned to the stage to tackle American exceptionalism. Rather than taking a default attitude of dismissiveness, Moran showed a genuine admiration for America and its oddities. On the strange American habit of yelling “Woo!” he remarked, “It’s so hot to be American, it burns. [So you go] woo!” He praised American culture and movies, positing that the reason that American culture was so pervasive was because the good parts of it are really good. He brought things back to Chicago, and put a tongue-in-cheek spin on the city’s problems with violence. “It doesn’t get any braver than calling themselves the Gaylords,” he quipped of gangs, followed by queries of how seriously one could take a gang that relies on the city bus as its primary means of transportation.

The audience was enamored with Moran, who skillfully catered his dry Irish wit to their Chicago sensibilities. At one point Moran was forced to chide a loudly intoxicated audience member, but when the audience booed the disrupter, Moran playfully scolded them for being so hard on the guy, handling the situation with a sensitivity and ease rare to see most stand-ups employ. His set was a mix of thoughtful introspection blended with pockets of crude humor, and any Chicagoan should be happy to share an Italian beef/sausage combo with him the next time he’s in town.

Here’s some other great comedy events coming up in Chicago this week:

Friday, June 28 I Au Revoir, Dahling: A Dan Ronan Farewell Show   This is Dan Ronan. I have been a cast member at The Lincoln Lodge for four years. On July 5th, I am moving to LA forever, or as long as $100 dollars will allow me to stay there (probably most of forever, right?). I have decided to sever all ties with my  extremely talented comedy friends here by making them perform in an elaborate pageant in my honor. There will be stand-up comedy, sketches, videos, and probably a live reading of the “Frasier” pilot where I play all of the characters. It will be a very good show, and after it you will never have to see me again. Never. This is it. It’s going to be a lot of fun. Come watch me host some of the best people in comedy before I die trying to break into the porn business.