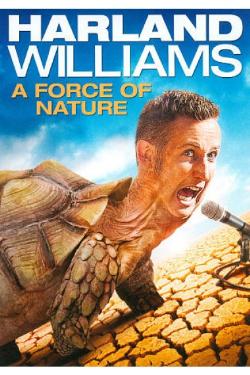 The special opens with a short, scripted sequence of our comedic hero wandering through the desert crying out for “comedy” the way Bill Carson cried out for water just before he died in “The Good, The Bad and The Ugly.” The scripted moments that follow aren’t nearly as good and can sometimes bring the main material to a halt. Though it’s a nice way to break up the monotony, they suck the spontaneity out of the moment.

It can also feel strange to hear Williams do his act without anyone reacting to it. Much of Williams’s schtick can be very silly and goofy. He’s known for making ungodly noises, faces and voices (thanks in part to his memorable performance as a whale-impersonating sonar ensign in the otherwise forgettable Kelsey Grammer comedy “Down Periscope”) to punctuate his material about dinosaurs, Chinese people and alien-like erections. These moments don’t work as well without an audience because they need the synergy of nervous laughter and facial reactions to strengthen and validate them. Witnessing Williams’s vocal chords twist and convulse within the vacuum of comedic silence can seem excessive and even creepy at times.

However, Williams’s true strength lies in the deconstruction of his observations. He can boil down any broad topic to its most basic form and present the absolute absurdity of something that seems so sane. (He deftly notes that every human is really just an “SO” or “successful orgasm.”) They don’t venture into deep, philosophical territory for long, but his descriptions and bits work well on their own purely as humor. His characterizations of babies as “little ‘Hills Have Eyes’” and rhinoceroses as “great, big, fat, white-trash unicorns” are sure to make any working observational comic wish they had thought of them first.

Williams’s experiment took guts to try. It says a lot about his respect for his audience to take such a leap of faith, even if there are moments when he doesn’t always land on his feet.

or Purchase on Amazon.com

Williams hails from the Great White North, as do these fellow Canadian comics:

Saturday, January 26 I Dinner With TJ – Season 2 Extravaganza! – Montreal, Quebec  YouTube sensation and man-child T.J. Hazelden has brought together some of his hilarious friends to join him in what will no doubt be an epic night of tomfoolery, chickanery, and jackassery. A live comedy show hosted by the man himself TJ Hazelden – with a sneak peek premier episode of “Dinner with TJ – Season 2.” Also on the bill: Mo Arora, Emma Wilkie, Kris Dulgar, the musical stylings of Aural Turpitude, Jason Yearow and featuring Morgan O’ Shea and Rodney Ramsay.

Wednesday, February 6 I Jay Hollingsworth’s Burning The Light Show featuring Duane Goad – Bellevue, Washington  Five comedians having a politically incorrect discussion of social issues, current events, and pop culture, discussed in an organized chaos of six minute long segments! After five minutes, the red lights come on and the panel has one minute to get their final thoughts in before the buzzer sounds and a new subject is discussed! NO subject is off limits and this show is NOT for the easily offended or politically correct. Prior to the show, audience members will tweet topic suggestions to the comedians and if their topic is selected, that audience member will be brought on stage to discuss their point of view with the five comedians! If “Tough Crowd” had a threesome with “Pardon The Interruption” and “Jeopardy,” in the middle of a town hall meeting, the offspring would be Jay Hollingsworth’s “Burning The Light!” Jay’s guests this month are: Duane Goad – a Seattle-based, Canadian-born, comedian whose sarcastic and biting style of comedy has entertained audiences at comedy clubs throughout the U.S. and Canada. When not headlining his own shows, Duane has been an opening act for comedians such as Jim Gaffigan, Bill Burr and Lewis Black. He is also a co-star in the independent comedy and film festival favourite ‘Hello. My Name Is Dick Licker.’ Currently, Duane is a contributing writer and voice talent for the MSN-TV series, ‘In Pictures’ which has had over 10 million viewers. Also appearing: Harrold Gomez, Kyle Ploof, Kane Holloway and one audience member to be determined at the show!

Saturday, February 9 I Bonnie McFarlane at The Comedy Shoppe @ Brick 46 – Rockaway, New Jersey  Bonnie did her first open mic in Vancouver, Canada. The manager of the club told her she should enter a contest, The Search for Canada’s Funniest New Comic. She did and she won. She moved to New York where she landed a manager, an agent and taped her first half hour special which still airs on Comedy Central. She became a regular on “The Late Show with David Letterman” and started headlining shows across the country. Most recently Bonnie taped her first HBO hour special, which is currently airing. Bonnie continues to pursue stand up, writing and acting and has created several multi media stage shows like “The Fake, Fake Show” starring Zach Galifinakis and a short film starring Patton Oswald called “Sushi Whore.”