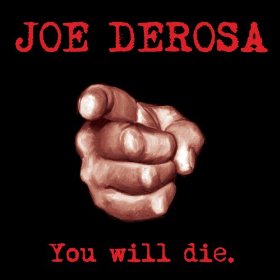 At a minimum, Joe DeRosa’s You Will Die merits a listen purely because of the unique circumstances surrounding its production. The first disc of the double album is the 70-minute set that DeRosa intended to perform. The second disc, however, is an unedited hour of DeRosa’s failed attempt to record that same set. What went wrong? A drunken audience that continually shouted at DeRosa, talked to each other during jokes and stared into their glowing phones.


The second disc—each track of which is titled “At the Mercy of Drunks”—showcases everything that can go wrong in a comedy club. But as DeRosa says on the disc’s introduction, the incident was not a reflection on the venue; he instead chalks it up to the old adage “Shit happens.”

You Will Die is DeRosa’s third album in the last four years. Where 2010’s The Depression Auction and 2011’s Return of the Son of Depression Auction focused primarily on DeRosa and his personal struggles, You Will Die finds him looking outward more frequently, taking the same cynical, critical eye that he’s so deftly used to make light of his own flaws and using it to point out what, in his view, plagues society at large.

This isn’t to say that DeRosa doesn’t dedicate a sizable chunk to examining himself. At 36, he’s entered “infomercial age,” where any product one sees on late-night TV seems worth having. DeRosa also hates social networking, is afraid of death and even eats at Golden Corral by himself: “the closest I’ve ever come to dying alone.”

The most interesting parts of You Will Die, however, arise when DeRosa diagnoses external problems, like how Twitter has ruined our attention spans, why nurses (like everyone else) are shitty at their jobs, and how no one seems to care about the breakthroughs scientists are constantly making.

To call DeRosa’s perspective negative would be a bit of an understatement. Comics are typically a cynical bunch, but the lens through which DeRosa views the world is, even for a comic, uncompromisingly bleak. That said, DeRosa rarely translates his negativity and cynicism into bitterness and fatalism. No, he’s not Bill Hicks offering romantic solutions to grandiose issues, but he’s not George Carlin, either, telling us why the world sucks and how there’s nothing we can do about it. DeRosa instead rests comfortably in the middle, seemingly content with the philosophy he’s carved out for himself, which essentially amounts to we’re here and life usually sucks, but we can still have an okay time.

To this end, he closes his set by encouraging the crowd to never give up their vices, as “they’re the only thing that let you enjoy this life.” Drink, smoke, do drugs, have sex, watch porn—these things, according to DeRosa, are good for you. Whether one signs up for his hedonistic attitude or not, DeRosa’s sharp comedy is worthy of attention. And You Will Die, for both its production as well as content, is worthy of consideration.

To kick off your New Year with some great stand-up comedy, check out:

Friday, January 3-Saturday, January 4 I Comedy with Brett Hamil – Tacoma, Washington  Brett Hamil is a standup comic based in Seattle. He performs at clubs, colleges, casinos, theaters, and festivals all over the country, including Bumbershoot and Bridgetown Comedy Festival. He writes a monthly humor column for City Arts, along with cartoons, essays, videos and interviews. He is the creator of the wildly popular award-eligible one-man sketch comedy podcast Ham Radio with Brett Hamil. He lives with his wife and a dog, both of whom he found on the internet.

Monday, January 6-Tuesday, January 7 I Luke Thayer: The Coffee Shop Tour – Indianapolis, Indiana  Stand-up comedian Luke Thayer brings his live show to a coffee shop near you! Luke is the creator of the popular live comedy hour, The Living Room in New York City and has been in numerous comedy festivals across the country and internationally. He has been featured MTV.com, Lifetime.com, Nerve.com and seen on Tyra, Season 2 of the Food Network Show, Food Detectives, and All Night with Joey Reynolds on NBC. Catch him this season on The Newly Wed Game with Sherri Shepherd and Comcast’s Trial By Laughter. He was recently listed in the NY Post‘s Comics’ Favorite Jokes.