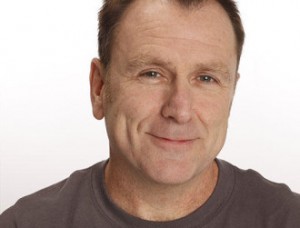 At the top of his 1 p.m. Just for Laughs Keynote Address entitled Losers…I mean Loners in Unity, Colin Quinn marvelled, “Do you know how old you have to be to be the serious person at the comedy convention?”  As always, his gruff, stuttering, defiantly lovable persona was by turns self-effacing and unapologetically aggressive. A typical comedy career is not one that reaches a series of levels, he noted, pointing to his own varying successes with Remote Patrol, Tough Crowd and now one-man show Unconstitutional. There will always be ups and downs. And in order to avoid some of those downs, his advice included the following:

Networks – Stop following “established” plans that do nothing but fail (and don’t test market to 14-year-olds).

Open micers – It takes five years to get any good. People doing it five years? It takes ten.

Established talent – Don’t be an a**hole. Say something. And above all, just be funny.

Finally, at the New Faces: Unrepped showcase, Matt Braunger hosted 11 up-and-comers currently unattached to managers/agents. Joe Zimmerman drew the unlucky opening slot but kicked things off on a high note with aw-shucks musings on choosing snakes as pets, the existence of Bigfoot, crime-fighting bears and what a biopic of Andrew Jackson might entail (excessive violence, a foul-mouthed parrot, Samuel L. Jackson in the title role, Samuel L. Jackson voicing the parrot). [Full disclosure: I have previously worked with Zimmerman’s Beards of Comedy group in a PR and booking capacity.]

“If I shave off my moustache,” facial-hair fanatic Doug Smith admitted soon after, “I would look like the 12-year-old I currently look like I molest.” His hipster attire belied a measured confidence, and his writing proved to be quirky yet twisted. “I think cocaine’s a problem if you’re doing a line of coke with a straw while your kid’s standing there crying with an undrinkable Capri Sun.” After sarcastically accepting full responsibility for single-handedly removing Homestyle Fries from the entire Arby’s chain, Mike Polk Jr. received a rare, well-deserved applause break for his building narratives positioning himself as an incredulous anti-hero. (Tip: accepting a vintage engagement ring from him would be a mistake.) And notorious “eavesreader” Andrew Orvedahl applied the same literary standards held by Fifty Shades of Grey to other classic works before delving into the personal realm, detailing both his recent divorce and his 4-year-old daughter peeing on him. Earnest and world-weary, he was the perfect example of how the best comedy often comes from a place of genuineness.

For comedy from top veterans of Just for Laughs festival, check out:

Saturday, September 7 I Headliner Comedian Myq Kaplan @ The Wormhole – Savannah, Georgia  Myq Kaplan is a Last Comic Standing finalist and has appeared on the Tonight Show, The Late Show with David Letterman, Comedy Central Presents, and Conan. The Comedians magazine calls him “a comedy machine, in the best possible way. the way that some machines vend soda or prevent other machines from killing future revolutionaries  that’s how Myq Kaplan does comedy: relentlessly, methodically, unblinkingly.” His comedy album Vegan Mind Meld was a Top 10 iTunes release.

Saturday, October 19 I Costaki Economopoulos – Shelbyville, Indiana  You may have seen him recently on the Showtime special Caroline Rhea & Friends. Over the years, Costaki has performed in 48 states, covering the country’s best clubs, hundreds of beautiful theaters, dozens of colleges, and some of the worst bars in America. Also a talented writer, Costaki’s jokes have appeared on The Tonight Show, The Late Late Show, and Best Damn Sports Show Period. He was a writer for BET, where he was staffed on two of their hit shows. He wrote jokes for Bette Midler’s Kiss My Brass Tour. Costaki spent spring break one year in Cancun writing on the MTV show Parental Approval. He also wrote daily for The Complete Sheet, a DJ prep service that goes out to almost 500 stations worldwide.

Saturday, October 26 I Rachel Feinstein at The Comedy Shoppe @ Pure – Parsippany, New Jersey  Rachel Feinstein grew up outside Washington DC in the ruthless streets of Bethesda, Maryland. She maintained a healthy, robust D- average in school, while still finding time to mock and imitate her loved ones. Rachel moved to New York city at age 17 to start her career as an actress and slowly developed her character driven stand up act which her mom refers to as her “Talent Show.” Rachel’ s Comedy Central Presents stand up special is now airing. She was also a finalist on Season 7’s Last Comic Standing and was featured on Russell Simmons’ Live at the El Ray, TBS’s Just for Laughs series and Comics Unleashed. Rachel has written for The Onion and has voiced various characters on Adult Swim’s Venture Brothers, the animated Comedy Central web series Samurai Love God and Spike TV’s Battle Pope. She has also been seen on E! And CNN’s Not Just Another Cable News Show.