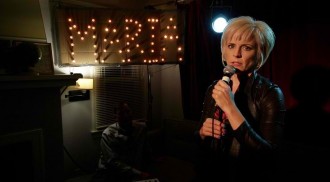 The concept for Maria Bamford’s new “the special special special!” sounds amusing—a direct-to-fans download (available at Chill.com) shot in her living room with an audience of just her parents and a couple of crew members. The natural question is, can that novelty sustain a full hour?

“Special” is a purposefully awkward, sometimes downright intense, series of character monologues. Wayne Federman adds musical accompaniment on keyboard and Jackie Kashian introduces Bamford, traditional touches that further set the stage. The whole thing feels like it could have been directed by David Lynch, especially the short asides of Bamford giving her pug, Bert, his eye medicine or feeding her parents pizza during a particularly dark bit. More than anything else it’s intimate, a good fit for the type of distribution model pioneered by Louis C.K.

A feeling of something loose and comfortable yet highly choreographed pervades. Bert loafs on the couch behind Bamford in a long shot as the ceiling fan whirs. Federman laughs along with Bamford’s parents, who are lovely. There is a designated pee break. It’s a different situation, however, during the shots tightly focused on Bamford. With just a red stage curtain in the background, she purposefully locks eyes with the viewer. Depending on the character she’s in at the time, this can be admittedly unnerving.

At one point, Bamford turns to her left and states without blinking, “I used to be like you. I used to know the difference between right and wrong.” The camera returns to the close shot. “Then I moved to Los Angeles and I lost ten pounds ’cause they take away the food before you’re done.” For a single sentence, she turns into a mean waitress, narrowing her eyes and cocking here head, intoning, “You’re done.” That leads to a bit about how a stomach virus helped Bamford lose weight, and how thin we’ll all finally be when we’re dead. She is gleeful about her grandmother’s funeral being open casket: “You got this girl; you finally got this!” Her parents both laugh—another level of strangeness.

Bamford flows from character to character in a snap, venturing farther out than she typically tends to do onstage. The oddity of the format has allowed her to dive deeper, to be stranger and to explore the things that make her laugh, things that might not connect the same way if she were filming at a large theater. She whispers with seething rage and brightens with the cracked smile and cackling laughter of the truly untethered, whether she is expressing her love for the “tuna nugat” in a gas station sandwich or talking about how The Man distorts her comedy for his corporate buddies. Her feet remain fixed behind the mic stand, but she is as manic as Robin Williams at his scenery-chewing best. It’s funny and grotesque, and the fact that her parents sit there and laugh as their daughter has a carefully-crafted psychotic breakdown is wonderfully disturbing. It takes on some added weight considering Bamford’s openness about being bipolar. A comedy special? This is a lost treasure from the Twilight Zone vaults.

Bamford recorded the special in her Los Angeles living room; check out some other upcoming events in her neck of the woods.

Thursday, December 13 I The Last Laugh in The Belly Room  Come see the hottest young comedians LA has to offer!

Friday, December 14 I The End of the World Charity Show and Party!  End of the World show is throwing a super special benefit for Recycled Resources for the Homeless. All proceeds go to charity for this event! Come join your friends at End of the World for a special edition of your favorite bi-monthly show in Silverlake on a Friday! The night will kick off with a Christmas party in the outdoor cafe with pictures, music, hot chocolate and cider, Harry Potter, a Christmas raffle, and more! They will be accepting clothes, toys, and non-persishables to donate to Recycled Resources. If you bring items to donate, you’ll receive a $2 discount on the door ticket price! The show features videos, sketches, and performances by: Dana Gould (“The Simpsons,” Comedy Central), Jerrod Carmichael (“Tosh.0,” Variety‘s Top 10 Comics to Watch) and Marc Maron (“WTF w/ Marc Maron Podcast,” “Conan”).

Tuesday, December 18 I Walking The Room Live X Mas Cuddle   The Walking The Room Podcuddle goes live for this once in a lifetime holiday special featuring Amiee Mann not singing and Jonah Ray not enjoying himself while dipshits Greg Behrendt and Dave Anthony shout over each other!