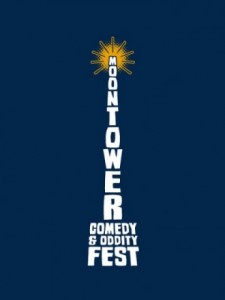 Any serious comedy fan who’s ever white-knuckled South by Southwest will both note and appreciate Moontower Comedy & Oddity Festival‘s comparative laser focus. Instead of an entire downtown clogged with spring breakers throwing elbows between literally hundreds of stages, the second annual Austin event features a dozen venues, with ten located no more than seven blocks apart. Instead of sponsorship capital from Monster Energy, Pepsi and Doritos brand-imaging a war over attendees’ very souls, do-gooder local outfits like Fun Fun Fun Fest and Comedy 102.7 radio hang unobtrusive thought-balloon signs to the side of small stages. (Both SXSW and Moontower happily agree to share IFC for now.) Most essential, instead of all-out debauchery, Moontower is about talent discovery.

Yet it was in the smaller rooms where ears of both audiences and industry genuinely perked. Badge-holding fans checking in on Austin journeyman Brendon Walsh’s progress were naturally stoked to find Kyle Kinane on a rough-and-ready “Assblasterz Inc.” bill at The Parish, but it was Comedy Central up-and-comers Sean O’Connor and Ari Shaffir they’d be Googling later at home. Similarly, while Christian Finnegan, Myq Kaplan and Sean Patton’s “Triple Threat” bill at The Velveeta Room might have seemed tossed-off on paper, grouping three of the best blink-and-you’ll miss-something reactionaries around was actually a stroke of masterful scheduling. (Cracking up in the back shadows, Kinane, Emily Heller and James Adomian certainly thought so.) The Austin uninitiated were visibly dazed by what they’d unexpectedly witnessed.

If the festival’s overriding mission is to introduce quality upcoming talent to casual comedy consumers—while keeping things financially sustainable in the process—they’re impressively ahead of the learning curve. If Moontower’s secondary goal is to force-spotlight Austin performers, however, Wednesday came up a mixed bag. While John Tole, Chris Cubas and Mac Blake repped well as openers elsewhere for bigger talent, Swan Dive’s hyperlocal “The Austin Show” only drew about 30 to a room seated for 125. Yet it too had its stand-out moments, with impressive sets from Derek Phelps, a character-leaning writer’s writer with a fragile stage presence recalling a more bookish Mitch Hedberg, and Ryan Cownie, whose deceptive pretty-boy looks belied a magnetic, in-the-moment performer occupying the same anything-goes realm as a Rory Scovel or Jon Dore. Both represented what Moontower is unquestionably poised to deliver: simple comedy transcendence, nary a vomit-puddle sidestep required.

Monday, May 13 I Mike Lawrence – Philadelphia, Pennsylvania  Fresh from his Comedy Central special, Mike Lawrence headlines a carnival at Connie’s Ric Rac! A comedy carnival that serves BEER, but doesn’t have any of those pesky rides or games or food!

Tuesday, June 11 I Marc Maron – Washington, DC  From standup to television to his popular podcast, “WTF with Marc Maron,” Maron is a disarmingly honest and intensely smart comic who finds wisdom in the strangest places. “Attempting Normal” is Maron’s journey through the wilderness of his own mind, a collection of painfully funny stories about hope and hopelessness, failing, flailing, and finding a way.

Sunday, June 23 I Fortune Feimster – Columbus, Ohio   Fortune Feimster made her national TV debut in 2010 on NBC’s “Last Comic Standing,” where she finished as a semi-finalist. That same year she was selected to perform in the New Faces showcase at the Montreal Just For Laughs Comedy Festival.