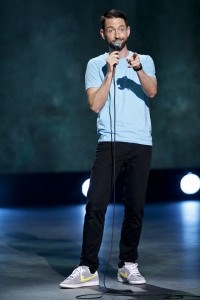 A stand-up special entitled Women and Black Dudes provides almost all the necessary information in its name. It indicates the hour’s subject matter, obviously, but also its bluntness and aversion to both too-clever meta comedy and anything resembling a cutesy pun. Comedy specials are often named after the punchlines of jokes; very few are named after the premises.

With a title like that, Neal Brennan’s targets are clear, and it’s his material on race that shines. He talks about his love of hip-hop and inclusion in the black community, and possesses a unique perspective as a white comedian ingrained so deeply in that culture. Jokes about his black friends’ ability to fall asleep anywhere and anytime, or the absurdity of white people going on police ride-alongs, are the best type of bit: very funny, and very specific to his worldview.

His thoughts about women run a little more pedestrian—apparently women sometimes dress impractically and like to take pictures of themselves. The jokes are well done but ultimately forgettable. And in fact, outside of race, many of the topics he explores feel a bit comfortable within the world of stand up—technology, Catholicism, the “sexual tyranny” under which men live.

Brennan is still, and will likely always be, best known for co-creating Chappelle’s Show, one of the greatest sketch shows of all time and one of the most challenging comedies in recent memory. He doesn’t shy away from this accomplishment—and is happy to capitalize on it when beneficial, as when he describes his encounter with the Obamas, both fans of the show—but neither does he dwell on it.

Occasionally, there are glimpses of the intelligence he brought to that series, though he seems hesitant to show it off. Early in the special, his attack on the reverence given to Mother Teresa and Martin Luther King, Jr. may at first seem like shock-bait, but it turns into a fair and thought-out cultural critique that hints at an interest in the more serious issues in society. That worldly engagement fades as the album goes on; the last track on the special’s album version is simply called “69ing.”

Despite starting standup in the 1990s, Brennan’s career was mostly devoted to television and film writing, and only since 2007 has he focused primarily on stand up (though he’s continued to direct shows like the first season of Inside Amy Schumer). While he clearly has a brilliant comedic mind, his stand up still has its flaws; he often giggles in lieu of a real transitions. (In fairness, he’s come a long way since his 2012 Comedy Central Half Hour, which is included as a bonus on the CD and digital download available January 21).

Women and Black Dudes is a good, solid hour of comedy, though not fantastic. In some ways Brennan is cursed; in many people’s minds, his best work will always be behind him. With this special, he shows promise that his stand up could one day equal his sketch-writing past, but it isn’t quite there yet.

Thursday, February 6 I Joey “Coco” Diaz – Houston, Texas  It’s a normal live podcuddle… except this one is SUPER! (stupid) Featuring Moshe Kasher. With a long list of credits to his name, Joey started off performing in Denver for “tough” crowds while serving a short stint at the local correctional facility.  Once he realized his talent for making people laugh, and of course after his release, he took to the comedy club stages and never looked back. Today Joey continues to make huge strides in Hollywood with television, podcasts and film roles galore.  Most recently he performed with Robert DeNiro in the Christmas 2013 blockbuster Grudge Match and was previously seen in, Spider-Man 2, Taxi, Analyze That and the film in which he stole everyone’s heart, the remake of The Longest Yard with Adam Sandler.  He’s graced the small screen in episodes of Comedy Central’s Secret Stash, Gabriel Iglesias’ Stand Up Revolution and as the headliner for Showtime’s Payaso Comedy Slam.

Thursday, February 13 I Brendon Walsh – Portland, Oregon  Enjoy a night of stand up comedy with the hosts of the BONEZONE Podcast, BRENDON WALSH and RANDY LIEDTKE and some special guests at THE FUNHOUSE in Portland! You’ve seen Brendon Walsh on Comedy Central (John Oliver’s NY Stand Up Show, @midnight and The Half Hour), CONAN, HBO’s Funny As Hell, The Joe Rogan Experience and every week on Tru TV Presents: The World’s Dumbest.

Thursday, February 13 I T.J. Miller – Columbus, Ohio  T.J. Miller is quickly becoming one of the most sought after young comedians and actors in the comedy world. He has been named one of Variety‘s “Top 10 Comics to Watch,” as well as one of Entertainment Weekly‘s “Next Big Things in Comedy.” Miller was most recently seen hosting the first season of Comedy Central’s MASH UP, a unique new half-hour series  an exciting mix of stand-up and sketch comedy. T.J. also co-stared in the Fox comedy series THE GOODWIN GAMES opposite Becki Newton and Scott Foley. In addition to his work on TV, he has a popular podcast on nerdist.com Cashing in with T.J. Miller which turns the traditional interview comedy podcast on its head.