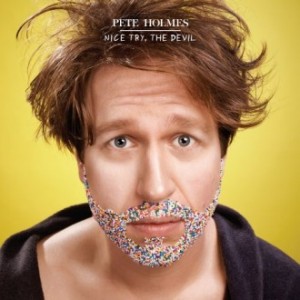 Pete Holmes is a “friendly fellow,” he says, unable to contain his giddy chuckles. He’s “the kind of guy that likes to get to the airport a couple hours early, get a few white wines in me and start telling old people they still got it.” And if your name’s Anna, he’s calling you “Banana.” The You Made It Weird host is a silly, silly man.

On Nice Try, The Devil, Holmes’s first hour-long special and second recorded set, he displays the same goofy onstage persona and unique, lighthearted style that have allowed him to ascend to the top of the alternative scene, yet he pushes some of his material into darker, previously unspoken corners. When I saw Holmes a couple times last November at the New York Comedy Festival, I felt his comedic perspective was evolving—that some of his newer material was straying in both tone and intensity from that of his fantastic 2011 release, Impregnated with Wonder. And, as evidenced by Nice Try, the Devil, it has.

By his own account, now Holmes curses more frequently, punctuating many sentences with Carlinesque curses for effect. He’s also opening himself up more, discussing his internal dilemma over whether or not to believe in God, the despair he feels over not bedding a woman when it’s his night’s mission and how, no matter who his girlfriend has been, he’s always hated her friends.

But Holmes also preserves his trademark silliness, creating absurd real-life scenarios built around video game characters, informing us why the McDonald’s tagline is the worst thing one can say at a party and re-hashing his infamous “Pierce!” bit.

What’s striking about Holmes’s comedy is that even when he’s venturing into the more personal areas of his life, he doesn’t ever tone down the silliness. And he shouldn’t. Holmes is unapologetically silly, even referring to one of his own bits as “stupid.” Holmes’s two minutes of “Pierce!”, for example, are so painfully pointless that it’s uncertain why Holmes bothered to include it on a recorded set. But at the same time, who cares? It’s hilarious. A disingenuous comedian wouldn’t be able to pull off something that’s so utterly frivolous. Yet listening to Holmes shouting things that rhyme with someone’s name, it’s clear he’s just being himself. He’s having fun. Holmes’s onstage behavior is not clawing at listeners’ ears, begging for laughs. It’s a representation of the real person.

Holmes is starting to blow up. He’s had a popular podcast for a while now, he does voicework in big-time commercials, his Batman portrayal is superb, and he’ll soon have his own television show. Life’s going well for the 34-year-old. Holmes isn’t the kind of comic who regularly mines his soul-crushing sadness for audience amusement, but much of his comedy clearly derives from personal anxiety and self-image. To that end, it’ll be fascinating to see how his success affects his material going forward.

Saturday, May 25 I “Schtick A Pole In It” with Paul Vizri – New York, New York  A night of comedy and pole dancing. Spring Break Edition at R Bar.

Friday, May 31 I Denis Leary’s “Burn” – Fresno, California  BURN is an action-packed documentary about Detroit, told through the eyes of Detroit firefighters. Produced & Directed by Tom Putnam & Brenna Sanchez. Executive Producers Denis Leary & Jim Serpico (Rescue Me, Apostle). A portion of proceeds from the wide release will go to the Leary Firefighters Foundation to purchase much-needed gear for Detroit Firefighters.

Friday, June 14 I Rich Vos – Montclair, New Jersey  Rich Vos is an incredibly gifted comic who not only has sharp, insightful material, but he is also a master at working the crowd. His ability to perform in front of any audience has landed him television shows as varied as being the first white comic on Def Jam to performing on The View. Rich was the breakout star of NBC’s Last Comic Standing seasons 1 and 3, was a regular guest on Tough Crowd with Colin Quinn and wrote for Chris Rock when he hosted The Academy Awards in 2005. He also played Lenny Bruce on NBC’s American Dreams and is a regular on the Opie and Anthony radioshow.