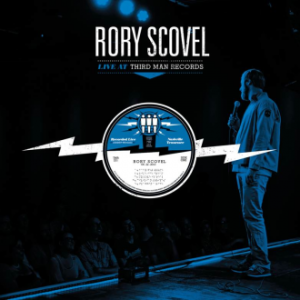 In theory, Third Man Records is far from the ideal distributor for a comedy album. The Jack White-founded label has a live venue at its Nashville, Tennessee base where musical performances are recorded and transferred directly to vinyl. The practice runs counter to how the majority of modern comedy albums are produced, in which two or more performances are typically edited together to create the best show possible. At Third Man, though, the artist—as is the nature of live music—gets just one take.


Rory Scovel’s Live at Third Man Records is his second album. Whereas 2011’s Dilation was an hour of 11 separate tracks on a range of topics, Third Man is an actual record, featuring an A- and B-side, each roughly 20 minutes long. And while Dilation featured material inspired by Scovel’s real life, Third Man is, by comparison, a radical departure, as it’s almost entirely bereft of any mention of Scovel the person.

Scovel spends the first five minutes of the A-side speaking in a German accent, bizarrely riffing on the phrase “such whats” for much too long. He then offers a few slogans for his character’s home nation—e.g., “Germany: we know that you know”—before slipping into a thick Southern accent to play a Christian comic-preacher who is weirdly aware that he’s at Third Man Records recording an album; Scovel references the fact that this album is on vinyl nearly half a dozen times.

The B-side features Scovel utilizing his normal speaking voice, doing more traditional material. He spends a fair amount of time talking about Salt Lake City—“the whitest city in the world”—before segueing into a discussion on different levels of racism.

Scovel’s not a traditional stand-up comic. He’s unapologetic about using voices, and he’s more than willing to detour around his material to play off the crowd. Those tactics make Scovel a unique talent, but it’s fair to say they might not make him the proper type of comic to record a one-off show. The mode by which Third Man operates is conducive to capturing intimacy—preserving the spark of a live performance that post-production inherently strips away. Scovel—obviously capable of carefully crafted material—takes full advantage of these circumstances, riffing and being hyper-present to such a degree that much of the album comes off feeling almost too in-the-moment. At times, it’s difficult to distinguish which material is prepared and which is authored spontaneously. This is unquestionably a performative gift, but comedy is dependent on landing laughs, and unfortunately for Scovel, much too often there isn’t enough of an overall positive reaction to merit a work created for posterity.

It’s unfair to condemn a comic for experimenting or trying to grow as an artist. And considering Third Man is available only as a physical record with no digital edition, it’s an ideal medium for experimentation. As it stands, Scovel’s effort is noble and well-intentioned, but the end result is far from what he’s proven capable of.

Saturday, October 26 I Rachel Feinstein – Parsippany, New Jersey  Rachel moved to New York city at age 17 to start her career as an actress and slowly developed her character driven stand up act which her mom refers to as her “Talent Show.” Rachel’s Comedy Central Presents stand up special is now airing. She was also a finalist on Season 7’s Last Comic Standing and was featured on Russell Simmons, Live at the El Ray, TBS’s Just for Laughs series and Comics Unleashed. Rachel has written for The Onion and has voiced various characters on Adult Swim’s Venture Brothers, the animated Comedy Central web series, Samurai Love God and Spike TV’s Battle Pope.

Saturday, November 9 I Rex Navarrete – Stockton, California  Rex is one of the most popular Filipino comedians in the last 10 years.  He has also had the distinction of becoming the most celebrated stand-up comic to perform to multiple sold-out shows in Manila, Hong Kong and Singapore since 2002. He regularly returns to Manila, which has become fertile ground for his style of stand-up, inspiring the growth of an emerging local stand-up comedy scene. His other current projects include his own television series, Rex In The City, for MTV Philippines, which shares his stand-up talents to a younger, hipper TV viewing audience throughout the Philippines. For the upcoming animated series in 2006, The Nutshack, Navarrete voices many of the series’ key characters in this groundbreaking Filipino-American animated production. Navarrete remains to be a one of the hardest working, relatively unknown American comedians today though he’s performed alongside notable national headliners as George Lopez, DL Hughley, Paul Mooney, among others. He currently resides in Portland, Oregon.