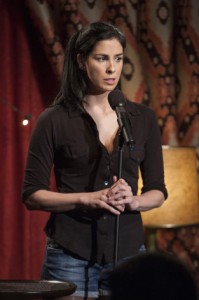 Sarah Silverman’s new HBO special We Are Miracles opens with the comedian outside the club where she’s about to perform. A car full of presumed gangbangers stops to chat her up. They mock her for performing in the tiny side room at L.A.’s Largo, which seats just 39 people, and Silverman responds with faux-indignation, “It’s intimate, f@#$%&*!”


That opening sketch, with its juxtaposition of vulgarity and vulnerability, sets the tone for the rest of the special, which finds Silverman unleashing plenty of obscenities but also pausing to examine their meaning, and confounding audience expectations by delving into some serious personal material.

One of the main by-products of the tiny venue is that almost every individual laugh can be heard, and there are plenty of moments when the audience’s hesitation is palpable as Silverman starts in on what appears to be a serious topic. About half the time, she turns that into a joke, but it’s almost more thrilling when she doesn’t, to see her evolution from delivering a series of self-consciously shocking punchlines to actually revealing something real about herself.

Elsewhere, Silverman spends significant amounts of time talking about her childhood, telling one particularly heartbreaking story about her sister’s need to be loved that wouldn’t be out of place in an autobiographical one-woman show. As expected, she talks frankly and hilariously about sex, but she also pauses frequently to reflect on how and why she says the things that she does. The deconstruction of a joke that “9/11 widows give great handjobs” lasts far longer than the joke itself, and is both funnier and far more revealing (it also manages to keep the audience consistently off-balance).

Over and over, Silverman barrels right into a seemingly shocking and offensive topic (“I need more rape jokes”), only to immediately backtrack and make her audience question why that topic is shocking and offensive. She gets a laugh out of the initial joke, and then she earns even more laughs from unpacking its absurdity. Her breakdown of why rape jokes are popular is completely unapologetic, yet still manages to turn the privileged arrogance of male comics who tell such jokes into the object of ridicule. Daniel Tosh wouldn’t know what hit him.

There are occasional missteps, most notably when Silverman gets overtly political (with some weak jabs at Republicans), but overall We Are Miracles is remarkably self-assured and powerful. It demonstrates Silverman’s depth as a performer while proving that she hasn’t lost any of the caustic edge that first made people take notice of her. It’s intimate, f@#$%&*!

For more great comedy from HBO veterans, check out:

Monday, December 9 I Marga Gomez – San Francisco, California  Marga Gomez is a GLAAD award-winning comedian and the recipient of The SF Bay Guardian and SF Weekly‘s “Best Comedian” 2012 award. Her television appearances include LOGO’s One Night Stand Up and HBO’s Comic Relief. Robin Williams has called Marga “Amazing.” Eve Ensler has called her “Brave, hysterical and feisty,” and The New York Times has hailed Marga as “deliciously cheeky.” Marga lives in San Francisco but performs nationally at universities, comedy clubs and events. On New Year’s Eve she will be headlining a comedy benefit for Brava Theater in San Francisco.

Friday, December 27 I Robert Kelly – Hamburg, New Jersey  Robert Kelly has overcome many hardships in his life, all of which have made him the actor/comedian he is today. From his early days as a kid growing up in Boston in and out of Juvenile Hall, Kelly’s unique, honest take on his own life and his relationships makes his comedy clever, abrasive, funny, but yet refreshingly vulnerable. He was recently seen as Louie CK’s brother Robbie on FX’s Louie and on CBS’s drama NYC 22 produced by Robert DeNiro. His other credits include Comedy Central Special Comics Anonymous, Comedy Central Presents Robert Kelly, Tourgasm on HBO, Jimmy Kimmel Live on ABC, Premium Blend on Comedy Central, Tough Crowd with Colin Quinn on Comedy Central, The Carson Daly Show on NBC, Law & Order, Awesomely Oversexed on VH1 and The Jim Breuer Show on MTV.

Tuesday, December 31 I Tim Cavanagh – Eau Claire, Wisconsin  Tim Cavanagh, a regular featured comedy guest on the nationally syndicated Bob and Tom radio show with TV credits including, HBO, Showtime and Comedy Central will bring his unique brand of comedy to Pizza Plus in Eau Claire.