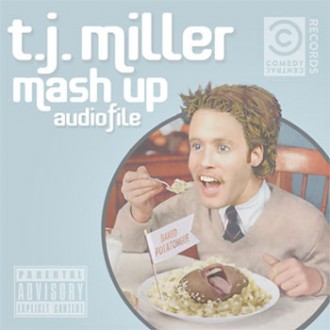 Opener “First to Welcome” establishes Miller’s maniacal, short-attention-span approach, riffing on awkward air-travel encounters while taking detours to comment on elements of the main joke. Shark attacks, “pee hands” and brass knuckles quickly follow. He nails a certain form of casual passive-aggression at the beginning of “Too Much Fun,” which recycles a “No Real Reason” bit by lamenting people who mock other people’s laughs. “You know what that’s basically them saying? ‘Hey, you know that sound that you make when you’re happy and joyful, and the tragedy that permeates our everyday life is momentarily abated for an escapist oasis? Yeah, you sound stupid.’” It’s delivered with the breathless conviction of George Carlin—minus the crusty misanthropy.

Miller is most certainly a gleeful freak, and his facility with improv means he rarely tells the same joke the same way twice. You may recognize some of these bits from TV’s “Mash Up” and his special, but they feel more off-the-cuff. And since this album only exists in the audio medium, the “mash up” element comes into play in the final  tracks, when material from TV—including jokes by Miller, Hannibal Buress, Pete Holmes and others—is remixed and grafted onto electro beats by producer Steinski, followed by three similar tracks from “Extended Play” producer Jesse Case.

It’s funkier than, say, Bill Hicks post-dating his sets with atmospheric guitar musings, but it also seems more intent on justifying the title than making for a meaningful listening experience. It’s also a bit like watching someone rip up a magazine you’ve just read and blowing the pieces through a fan, since you experienced many of the same jokes minutes prior.

If you’ve got a strong grip, it’s certainly worth the ride, but Miller’s hyperactivity and the imbalanced presentation give it a neither-here-nor-there quality. That said, the restless experimentation Miller has shown the last couple years is a tantalizing hint of stand-up’s multimedia and cross-genre potential. The fact that most of it’s really funny isn’t just a bonus, it’s the point.

or Purchase on Amazon.com

Miller first started performing in Denver before moving to and exploding in the comedy hub of Chicago. The next local star might be found among one of these upcoming Chicago shows.

Friday, January 11, Friday, January 18 and Friday, January 25 I Comedy at the Lincoln Lodge  Now in its thirteenth season, “The Lincoln Lodge” stand-up comedy and variety showcase plays every Friday at Chicago’s classic North Side diner, the Lincoln Restaurant. In addition to The Lodge’s rotating cast of emcees, a fresh line-up of stand-up comedians and a variety/music act is featured each week. The show’s mission is to showcase Chicago’s finest up-and-coming and touring comedians and past performers include Fred Armisen (“Saturday Night Live”), T.J. Miller (“Carpoolers”), Marc Maron (“WTF Podcast”), Janeane Garofalo (“Saturday Night Live”), Natasha Leggero (“Last Comic Standing”) and Kristen Schaal (“Flight of The Conchords”). Because the show’s producers have created their own portable cabaret space inside this classic 1970s North Side diner ,”The Lincoln Lodge” is arguably Chicago’s most unique comedy experience!

Saturday, January 26 I Comedians You Should Know at the SoDo Theater  Comedians You Should Know is six Chicago-based stand-up comedians intent on changing the face of Chicago comedy via their weekly downtown show, videos and comedy tours. Their self-titled album on Red Bar Comedy Records debuted at #1 on iTunes.  Members of the collective have appeared on TV, and been featured on Sirius XM satellite radio!  They been mentioned in Time Out Chicago, Laughspin.com, and more!  Comedians You Should Know have worked with Marc Maron, Hannibal Burress, Steve Byrne, T.J. Miller and more! On Saturday, January 26th, CYSK members Drew Michael and Marty DeRosa will be in Champaign at the SoDo theatre!  Opening for them will be fellow national headliner Collin A. Bullock, and local comics Justin Tuttle and Jason Dockins.  If you’re a fan of hip, independent stand-up comedy then this show is not to be missed!

Saturday, January 26 I “B-School Made Me Funny!” – Starring Comedian Anish Shah  The nationwide “B-School Made Me Funny” comedy show is coming to Chicago! STARRING Comedian Anish Shah, a Yale MBA, turned McKinsey consultant, turned comic (turned disappointment to his parents). PLUS…watch as a few Booth students perform stand-up and compete to become “The Funniest Person in B-School!” In 2001 Anish Shah graduated from University of Illinois with a sparkling 2.41 GPA that only took him 5.5 years to complete. The unlikely events that followed took Anish to Head of Marketing of $50M tech firm, an MBA from Yale, 5 years at McKinsey & Company, leadership of a small tech firm that was bought by IBM, and finally walking away from the corporate world to become a stand-up comedian that has been fortunate enough to make more than a dozen television appearances, travel the world telling jokes, and raise hundreds of thousands through charity comedy events.