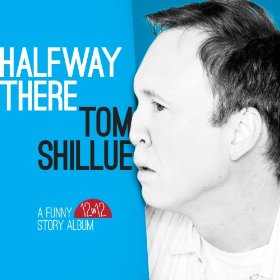 The title “Halfway There“

refers to both this album’s place in Tom Shillue’s yearlong slate of monthly releases and his status as a popular kid in school. This is album number six, which means Shillue has released something approaching three-and-a-half hours of new material so far. And he’s only halfway through. Impressive in quantity at the very least. And in quality. And consistency.

There is something qualitatively different about the material on “Halfway There,” and the material in this series in general, that sets it apart from the rest of Shillue’s catalogue. Shillue has the assured cadence of a storyteller no matter what the setting in which he is performing. But look back through clips of his Comedy Central special and late-night appearances,  compare them to “Halfway There,” and you’ll see an incredibly adaptive comic. The material in those clips is tailored to the crowd, more general. Shillue has gotten more personal for this project. He could be reading from a well-constructed memoir or a piece for NPR.

“Halfway There” is also the name of the first track, in which Shillue admits he has always “suffered from high self-esteem.” The specific tag is used in a story about a young Shillue strutting to second grade in an outfit that made him look like that cool guy Christopher Robin from Winnie the Pooh. Wearing brown knee-length shorts, tall white socks, a white Oxford shirt (tucked in), shiny shoes and sunglasses, he walked into class late on purpose so everyone would look at him and think he was cool. He got the attention, but not necessarily the admiration he was seeking.

The second segment on that track is another short story, a Wobegon-like tale of traveling with the family and specific strategies to get his dad to pull over for McDonald’s. Most of the album is dedicated to the breadth of Shillue’s childhood, from grade school on up to his first drinking stories. He reads from his high-school diary for track two, “Wonder Boy,” with a charming naiveté and sticks mostly to stories about his parents on “Flat Tire.” He ends on a wistful note about his father, a kind of familial kiss goodnight to the audience.

Every word and sound has been carefully chosen; nothing falls out of place in each well-edited story. (One six-and-a-half-minute chunk is actually read from the written page.) There was a strong potential for portions of “Halfway There” to sound stiff and contrived, and to those who like their comedy more rough and raw, it may well seem a bit precious. But Shillue’s expressiveness as a performer, even when limiting himself only to audio, and his painter’s eye for detail keeps his stories engaging and endearing.

When I reviewed the first album in this series, “Better Stronger Faster,” I noted that Shillue was off to a strong start and just needed eleven more strong 35-minute chunks. So far so good. Now he only needs another six.

For some top storytelling offerings, check out:

Wednesday, May 8 I “This Is Awkward” – New York, New York  Jonathan Blank and Samara Doucette say what everyone else thinks on dates, but never says… so join them and guest comedians as they divulge all of their wildest and most embarrassing dating stories!

Saturday, May 18 I “Comedic Storytelling and The Stage Created Memoir with Margot Leitman” – San Francisco, California  Let seasoned storyteller and published author Margot Leitman teach you to take your comedic storytelling to the page and the stage in these two workshops.

Friday, July 26-Saturday, July 27 I Ngaio Bealum – Tacoma, Washington  A finalist in the San Francisco International Stand Up Comedy Competition, his great storytelling ability, combined with hit razor sharp wit and engaging stage presence never fail to leave any audience howling with laughter. He has appeared on ABC, MTV, BET, Comedy Central (most recently on “The Sarah Silverman Program”), and many other television shows like “Byron Allen’s Comics Unleashed” and “Merv Grifin’s Crosswords.” He is also a regular guest on The Doug Benson Podcasts.