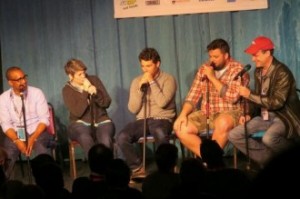 Attendee response to the first day of comedy at Austin’s 2014 South by Southwest Interactive/Film/Music Festival proved one thing undeniably: comedy personalities and projects are garnering more mainstream attention and attracting larger fan bases than ever before.

By early afternoon, the overflowing Convention Center hallways were rivaled by their meeting room counterparts. Though it was technically filed under Film programming, the 2 p.m. discussion between moderator Jeffrey Tambor and fellow Arrested Development castmember Jason Bateman (regarding directorial debut Bad Words) reached capacity and then some, with badgeholders huddled around the closed-circuit television outside the doors. Similarly, the Inside Late Night with Seth Meyers panel attracted a line that doubled back on itself an hour before its 3:30 start time, and hundreds were turned away after doors opened and the room immediately filled.

Over at 6th Street venue Esther’s Follies, Aisha Tyler’s 4 p.m. Girl on Guy podcast had been cancelled (a new TV pilot forced the comic-actress to break her SXSW commitment), meaning the first comedy event most fans could actually attend was a 5 p.m. live recording of the Harmontown podcast. Though the late addition to the lineup—a bid by Community and Rick and Morty writer-producer Dan Harmon to up interest in the four Film screenings of his Harmontown documentary—was offered the Esther’s Follies locale freed up by Tyler’s absence, Harmon curiously insisted on the Hilton Hotel’s Liberty Tavern, a cavernous bar off the lobby with high ceilings and plenty of background chatter.

Esther’s reclaimed its title as SXSW’s traditional comedy epicenter at 6 p.m. with Matt Besser’s improv4humans podcast recording. Besser hosted Shannon O’Neill (UCB), Adam Pally (Happy Endings) and Jon Gabrus (Guy Code) as they created characters based on suggested topics including Carrot Top, New Jersey and Rob Ford, and though Saturday Night Live alum Tim Meadows was ostensibly part of the show as well, he ultimately didn’t contribute more than a few dozen words the entire hour and a half.

Following Grawlix sets by Besser, Andy Peters, Emily Maya Mills and Matt Braunger in front of an ever-swelling capacity crowd, Set List: Stand-Up Without a Net coaxed spur-of-the-moment material out of Peters, Braunger, Cayton-Holland, Nate Bargatze, Ben Kronberg, Kate Berlant and Jonah Ray. Though creator Troy Conrad was absent from his show’s first of two nights due to a family emergency, producer and host Paul Provenza kept spirits high even as the audience dwindled to wait in the drizzly, unduly long line for the SXSW Comedy Opening Party presented by NBC’s Late Night with Seth Meyers. Inside Buffalo Billards four pool tables were cordoned off with velvet ropes, behind which Meyers, Pete Holmes, Scott Aukerman and more found themselves gaped at like show ponies. It may have been Seth’s party, but it was clearly his interactions with the comedy stars determining the future of the industry the crush of attendees were most curious to see.

“If it grabs you around the neck, you’ve got it,” Jeffrey Tambor explained of creative passion at the top of Day 2. “If it causes a fire in the belly, you’ve got it.”

Onstage for his ninth Jeffrey Tambor’s Acting Workshop as part of the Film Festival, the Arrested Development star directed actors Bridey Elliott and Griffin Newman through a tear-jerking break-up scene and spoke with magnetic conviction about the force that drives artists to pursue challenging work, whether it be visual, musical or comedic in nature.

Opening things up mid-afternoon at Esther’s Follies, Scott Aukerman recorded his Comedy Bang! Bang! podcast not once but twice, the second iteration filling the gap left by The Smartest Man in the World podcast host Greg Proops, whose SXSW trip was barred by a case of bronchitis.

The next few hours were a challenge for even the most efficient and nimble comedy fan, kicking off with multiple sold-out stand-up showcases. At The Hideout, Rooftop Comedy recorded sets from local host Maggie Maye, Nick Rutherford, Adam Cayton-Holland and Andy Peters, whose volume levels in the black-box theater memorably walked a woman dealing with the physical after-effects of a concussion. Afterward a second evening of Set List: Stand-up Without a Net featured spur-of-the-moment material from Iliza Schlesinger, first-timer Chris Gethard, Jay Oakerson, Jerrod Carmichael and a special guest bit by a bald, pudgy software developer and diehard Set List fan named Larry.

A line already wrapping around the block outside Esther’s Follies for 10 p.m.’s Up Next featuring Fred Armisen, inside The Meltdown with Jonah and Kumail featured the titular Jonah Ray and Kumail Nanjiani, plus Andrew Orvedahl, Byron Bowers, Andres du Bouchet and a white-hot crowd that lavished multiple applause breaks on James Adomian for character forays including “Marc Maron Being Tucked Into Bed by Louis C.K.” And at Funny or Die’s unofficial Super Serious Show, a chatty, rowdy crowd was forcibly called to attention by host T.J. Miller, du Bouchet and Jermaine Fowler.

Closing out the second evening of comedy programming, the Comedy Gives Back charitable event live-streamed to benefit the Feeding America non-profit befell an inattentive, schmooze-centric atmosphere at the Yahoo-sponsored Brazos Hall. In contrast, Above Average’s Sunday afterparty was a decidedly relaxed and inclusive affair. Hosted by Good Neighbor at the converted Blackheart house, attendees including Gethard, Sasheer Zamata and Kate Berlant diffused throughout the dance room and covered back patio, enjoying an open bar and complimentary Above Average tee-shirts. With an environment eschewing relentless networking in favor of community spirit, it was a microcosm model of how SXSW comedy events ideally exist among the festival mayhem.

Winner of the day’s best guest introductions, Todd Barry welcomed Ben Kronberg onto his Todd Barry Podcast at Esther’s Follies with the recollection, “This guy, oh man, we tried to get something to eat last night. It didn’t work out.” (Kronberg repayed the “compliment” by praising Barry’s as “the Letterman of podcasts.”) Prior to third guest Andres du Bouchet, Barry admitted, “My next guest, I don’t knew that well. Seems nice, though: Iliza Schlesinger!”

In the 8 p.m. Esther’s slot, Brown Paper Tickets presented the live return of The Green Room with Paul Provenza. After holding the curtain 15 minutes to redirect overflow from Funny or Die’s 500-capacity Bill Cosby event in the covered back yard of the Lustre Pearl house-turned-bar, Provenza, Jim Breuer, Scott Aukerman, T.J. Miller and Jay Oakerson toked from a green apple and discussed Patrice O’Neal and other late performers, the generational gap and confidence versus fraudulence. Amid swapping stories about Bob Saget, Cosby and Tracy Morgan, they collectively agreed that their reasons for performing were universal: Life is short. Pay the price to do what you love. 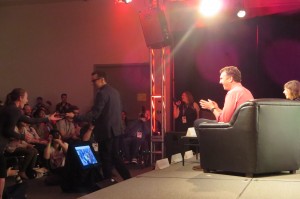