The second place runner-up for our DIY Gig Poster contest hails from right here in Brown Paper Ticket’s home of the Pacific Northwest. They are Inside Outlaws from Woodinville, Washington and they specialize in covers of the best classic rock. So, we’re talkin’ Led Zeppelin, AC/DC, Heart, Pat Benatar and Janis Joplin to name a few. They also throw in some modern day Top 40 hits to get the younger crowd out on the dancefloor. The band strives to be “a band with powerful vocals and music that everyone loves” and judging by the number of votes that they received in our contest, they’ve achieved that. END_OF_DOCUMENT_TOKEN_TO_BE_REPLACED

New York: Have A Drink On Us! 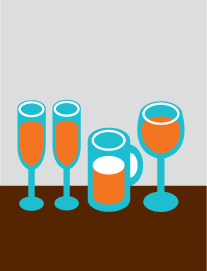 Now that the Holidays are over and the new year has begun, why not come out to Brooklyn & meet me, AJ Andrews, your local NYC Brown Paper Tickets representative? I’m hosting our next producer “Meet & Greet” in New York tomorrow at Brooklyn’s own Barcade.

Come have a drink on Brown Paper Tickets, meet other NYC producers and enjoy a little relaxation after the holidays! It’s a great forum to share ideas and create partnerships with other local NYC professionals in the entertainment industry. Ask questions, expand your creative reach and seek advice from others who have been successful! You can RSVP to this free event right over here.

I hope to host monthly events where various event producers can meet, mingle and develop partnerships in the greater New York area.

If you have any questions, please feel free to email me!

I hope to see you soon! -AJ

It’s been too long since we’ve posted a BPT Mixtape, but fear not, the wait is over. Graeme over in our UK office put together a killer mix of his favorite hard-rocking hits. Lots of great stuff here: classic 70’s hard rock with AC/DC and KISS, some nice Brit-pop courtesy of Oasis, James and the Manic Street Preachers and current indie-rock faves The Hold Steady and The Gaslight Anthem. There’s even some comedic rapping courtesy of New Zealand’s Flight of the Conchords! One thing these songs all have in common? They all rock. Thanks Graeme. END_OF_DOCUMENT_TOKEN_TO_BE_REPLACED

Metal Pioneers Diamond Head Tour the U.S. for the First Time in 35 Years!!

Heavy metal has gone through so many phases in it’s forty-year existence that just saying “heavy metal” isn’t enough to specify what you’re talking about; there’s thrash metal, speed metal, glam metal, industrial metal, death metal, black metal and so on. But, the first heavy metal sub-genre to gain popularity after the initial crop of bands (Deep Purple, Black Sabbath, Led Zeppelin and Judas Priest) was the New Wave of British Heavy Metal. The NWOBHM started in the late ’70s and the bands incorporated elements of punk (which was taking Britain by storm at the time) and played harder and faster than their predecessors, with less blues influences and a lyrical focus on mythology, occultism and fantasy. All this came together to create a tougher sound with crunching power chords and lightening-fast guitar solos.

Key bands of the New Wave of British Heavy Metal were Iron Maiden, Def Leppard, Saxon and Motorhead. Another key, but less recognized act in the movement was Diamond Head. While Diamond Head never achieved the level of success that was reached by some of their peers, they would prove to be a major influence on the thrash metal scene of the late 80’s. Metallica covered a number of their tunes and bands like Megadeth and Anthrax have both cited the band as a key influence in their sound. END_OF_DOCUMENT_TOKEN_TO_BE_REPLACED

BPT Mixtape #13 – Michelle’s the Baddest of the Bad

Our resident roller-girl Michelle is one tough cookie and she’s put together a playlist of tunes that get her pumped up to hit the track and kick some butt with the Tilted Thunder Railbirds. She’s got a great sampling of killer punk rock, metal and raw rock n’ roll and I figured this would be a great soundtrack for you all to get ready for the work week. While you might not be risking a dislocated shoulder or a black eye, sometimes we all can feel a little beat up from our daily lives.

Here’s what Michelle has to say: “This is the playlist I put on my MP3 player before a bout. Gets me amped up and ready to tear it up out on the track. Enjoy!“

So, whether you’re a fellow roller-girl or just need a little adrenaline-shot to get you ready to face the nine to five, this is the mix for you. END_OF_DOCUMENT_TOKEN_TO_BE_REPLACED