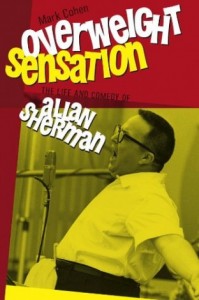 Most casual comedy fans know Allan Sherman as the guy who wrote the summer camp parody song “Hello Muddah, Hello Faddah.” Or at least they’ve heard it somewhere, in a commercial or on the radio, even if they couldn’t identify Sherman by name. In Overweight Sensation, Mark Cohen argues for a much more robust legacy, one that puts Sherman at the forefront of opening up American society to ethnic humor.