Land of the Tease: Home of Burlesque

I know that technically, Europe is the historical home of burlesque. The term first appeared in 17th century Italian, French and British opera and literature. However, the modern definition of burlesque which provides the inspiration for the current revival has its roots in the burlesque houses of New Orleans, New York and Las Vegas, right here in the good ‘ol U.S. of A.

Therefore,  it seems fitting, as we approach the most patriotic of American holidays, that so many of our burlesque producers are paying tribute with 4th of July shows.

Today, we feature some of our favorite 4th of July shows along with quotes from the performers themselves on what audiences can expect. Sure, fireworks are great, but I think these shows will get your blood pumping as well. Nice thing is, most of these shows happen on Saturday, July 5th so you can enjoy a nice wholesome family Fourth on Friday and indulge your wild side on Saturday. Sounds like the perfect weekend to me!

THE FOUNDING FOLLIES! An Evening of Explosive Independence – Philadelphia, Pennsylvania   Come watch as Broad St. Burlesque & company pay tribute to the greatest country in the universe the only way they know how- with glamour, glitter, and acts of undress! Broad St. Burlies’ Hayley Jane and Liberty Rose said: “To us, Philadelphia is the home of independence and no national holiday cultivates community with such vigor as 4th of July…As Philadelphia’s tag team champions of burlesque, we could think of no greater way to honor our city, our country and our freedom than to dress up like presidents and go off like fireworks!” Can’t get more patriotic than that.

Cyn Factory Saves America at the Bier Baron – Washington D.C.  Here’s what Mary Cyn and Sarah Tops of Cyn Factory have to say about their upcoming show: “Every city has a holiday that it “owns”. Chicago has St. Patrick’s Day, New Orleans has Mardi Gras, New York and San Francisco share Halloween. 4th of July is DC’s holiday and we’re really excited to be part of the celebration. The neo-burlesque that Cyn Factory presents is especially American because, while there is burlesque all over the world, it tends to be mostly classic and dance-based. What Cyn Factory presents is largely story-based and influenced by theatre and performance art, creating an American spin on a worldwide art.”

Fireworks – Beacon, New York  Fireworks producer Dr. Lucky had this to say about why Independence Day and burlesque are such natural bedfellows: “Independence is a great way to describe what so many performers and fans alike love about burlesque: independent women (and some men) creating their own personas, acts and costumes and really going for it on stage. It’s what America is built on: independence and individual free will.” Amen to that Dr. Lucky!

Pasties for Patriots Burlesque Show – Austin, Texas  Another incredible Austin-based troupe, the Bat City Bombshells will show you their best Americana-inspired bump and grind at this show at the incredible 6th Street venue The Parish. Bat City Bombshell Sherry Bomb says: “The Bat City Bombshells have celebrated the 4th of July for the past three years with our Pasties for Patriots Show, it is our time to really celebrate everything Americana. Burlesque is ingrained in American history, so it is only fitting for this time of year to be popular in the burlesque community. Whether it is satirical political humor, classic pin-up or a salute to the troupes, a wide array of performances can be found for this patriotic holiday!

Be sure to pick up tickets to these great shows as they’re going fast and, from all of us at Brown Paper Ticket, HAPPY FOURTH OF JULY!!

Comedy Outliers: Would You Like Be On My Show? 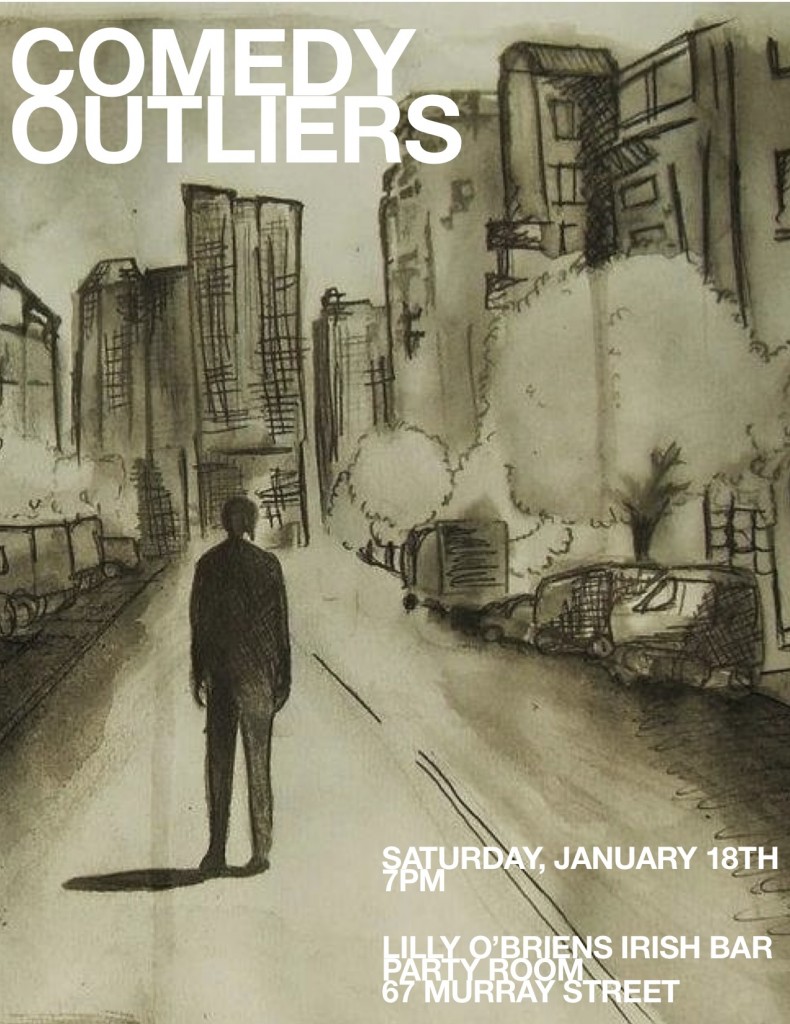 The Comedy Outliers have their annual holiday show coming up this Saturday, January 18th at Lilly O’Brien‘s in New York City. Their shows are free but we highly recommend you pick up tickets so you don’t show up to a full house.

Those are words that a producer loves to hear when they are trying to book acts for their shows. Reaching out to talent to perform on your show can be quite intimidating and it is often accompanied with rejection or delayed responses that may not come until a week AFTER your event happened. Nonetheless, when you get the act that you feel will be a great fit for your show it is extremely rewarding.

There have been times when we reached out to a comedian about performing on our show only to have them respond that they were unavailable. Did we leave it at that? Of course not! We politely follow-up every month or so with the next date and to inquire about their availability to perform on our show. Sometimes this back and forth goes on for months and in some cases it has taken almost a year to book specific comics (cough) Hannibal Burress (cough)!

Remember when you are trying to book talent that you need to be professional, polite and understanding of their schedules. Creative people, especially comics are impulsive and at times unpredictable which causes challenges when booking them. There have been times when despite our efforts a comic will bail last minute because of a random paying gig that came up…not going to knock that because everyone’s gotta eat! Other times they double-booked themselves (step your Google calendar game up!) However, we never take these cancellations personally but we do try to build line-ups where the comics compliment each other so it may be quite some time before we reach out to that particular comic again if we find that they aren’t the best fit for next month’s show.

Booking a show that will have numerous acts can be stressful and overwhelming at times but this is what we deal with to create the best show possible right? When you get the talent you’re looking for, don’t forget to make sure they enjoy themselves and have a memorable experience so that they can pass the word and hopefully make it easier for you to book other talent through positive word of mouth! 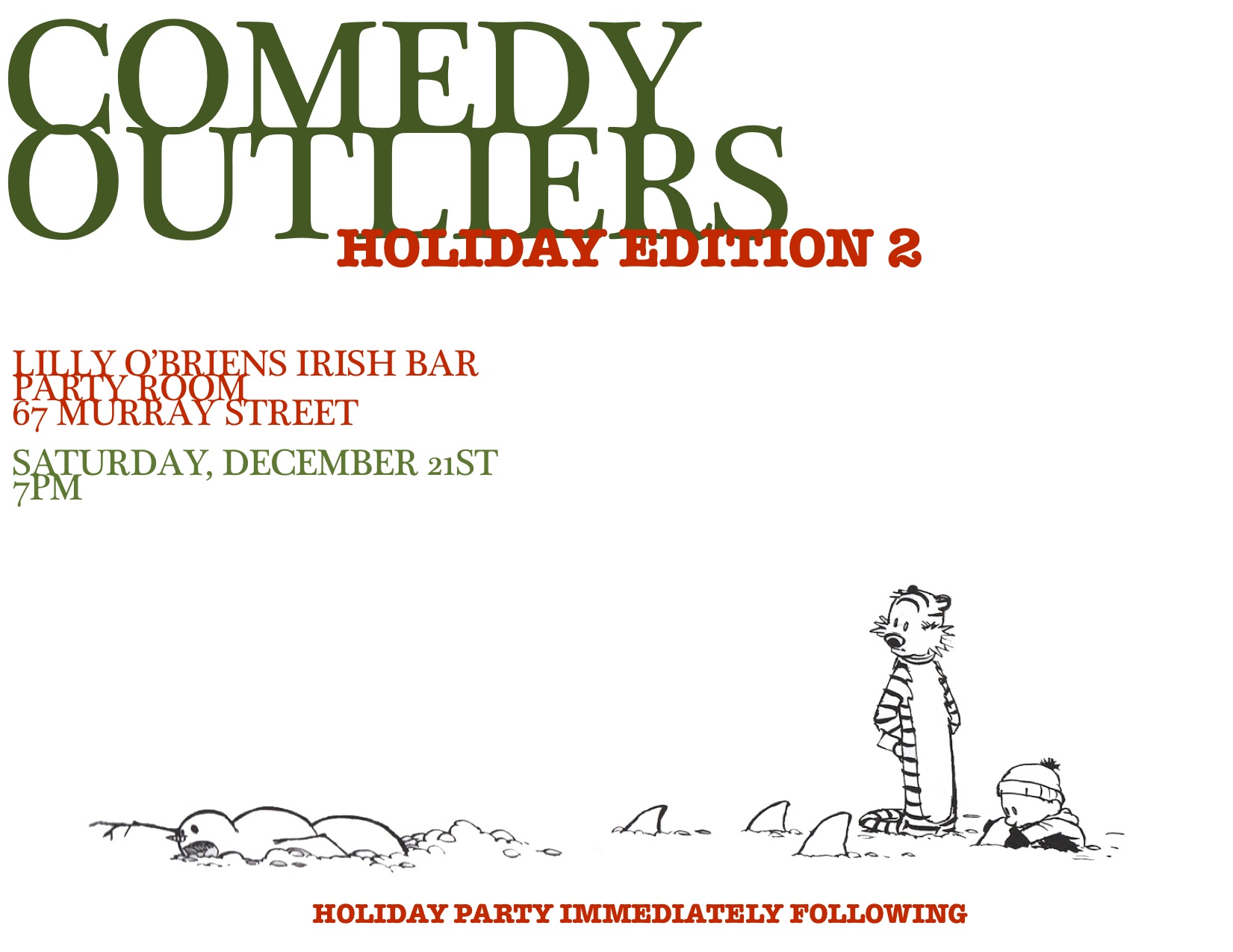 The Comedy Outliers have their annual holiday show coming up this Saturday, December 21st at Lilly O’Brien‘s in New York City. Their shows are free but we highly recommend you pick up tickets so you don’t show up to a full house.

This month, their column was written by Tatiana Albandos who handles their customer service and outreach during their shows. Without further ado, we present Comedy Outliers:

We are often asked, “How do you always have a full audience?” The secret to a loyal audience is actually no secret at all! Along with an awesome line-up for each show, great service helps us bring them back every-time! Here are three things you should always keep in mind when providing the best customer experience possible: END_OF_DOCUMENT_TOKEN_TO_BE_REPLACED