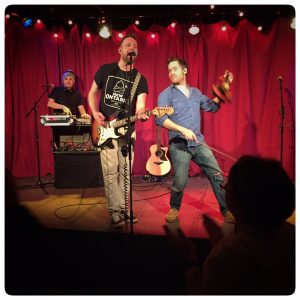 Franco-Ontarian artist Michel Bénac, singer, musician and entrepreneur has prevailed in the music industry for the past two decades. His career is starting to take off to new exciting heights. Recently, his music brought him across the Atlantic to the land of his French cousins. We were lucky enough to catch up with him during his “Tour de France” and find out more about what he’s up to.

Tell us a little bit about your group, LGS and your career…

M.B.: Eighteen years ago, we launched our first album “La Chanson Sacrée.” It was an exploratory album, where we mixed traditional Canadian folk music with American pop. I am Franco-Ontarian and when I first started singing, I did not even think about singing in French. The only option seemed to be to sing in English. My career stalled real quick: media and disc companies claimed that my style was fake. But my culture was not anglophone. So I stopped for a couple years but still had the craving. I thought,“Okay, I am not American. I am Franco-Ontarian.” One of my grandfather played the accordion, the other played the fiddle. I had deep traditional roots. So in 1999, I decided to combine traditional folk music with American pop. It was totally avant-garde at the time. The album had the effect of a bomb. We launched it in April 1999. We had three shows that year. The year after we had about 10-15 shows and in 2001, we had 165 shows.

One or two concerts you will never forget…

M.B.: I played during the closing ceremonies of the PanAm Games in Toronto in 2015. It was totally insane. I got married on July 15 and I had promised my wife to not take any shows during our honeymoon. We get married and leave for San Francisco on a Friday. On Monday morning, I get an email from someone from the organizing committee saying: “The closing ceremonies happen in 6 days and we are looking for a francophone group to come perform. We’d love for you to be with us.” I had promised my wife not to take any shows during that week. I am always on tour, never home on weekends or on holidays. I thought, “I cannot do this to her.” And so I tell her, “This is what I just said no to.”

She answered, “Are you crazy? Let’s go to Toronto!” We got there the following Friday. Sound check on Saturday afternoon and on Saturday night, I was playing on stage in front of 50,000 people at the Rogers Centre and 44 million on TV. I’ll never forget that night. It was magical. We opened for Pitbull and Kanye West. Unheard of for a Francophone-Canadian group.

Another memorable show for me was in November, 2000. We were doing our first showcase at the Francofête en Acadie, in a small bar in Moncton. About 30 people attended the showcase and we gave it all that we could (which is why we got booked for 165 shows the year after). After the show, I got to the bar and a bearded man came to me to buy me a beer and told me, “I love what you do.” I answered, “Thanks, my name is Michel” and he said, “My name is Cayouche.”

Cayouche is a Acadian legend! It was a great honor.

Any advice for young artists?

M.B.: Be patient. You cannot make a career if you don’t work on improving your lyrics and your melodies. Be original. Don’t be scared to be yourself. Most artists did like me at the beginning: you start imitating the artists you love and you forget everything about your own integrity. We hide behind our idols. Be honest. Be who you are. Accept it and give it back to your public. After that, it’s about 80% business and 20% talent! Work, and work, and work and you will be successful.

You have also started your own production company…

M.B.: Over the years, I noticed that many talented Franco-Ontarian artists I respected disappeared from the market and the stage and I wondered why. That’s why I decided one day to produce Franco-Ontarian artists. We are still at the embryo stage in French Ontario. All the francophone disc companies are located in Montreal, Quebec. If you are not from Quebec, it is very difficult to get a contract with these people, unless you already work abroad and are coming to Montreal. But I am proud of my Franco-Ontarian heritage, of our differences and nuances. I want to participate in the genesis of the Franco-Ontarian industry. My production company La Fab currently has 2 artists: LGS and Gabrielle Goulet, a country, indie pop artist who has just released their second album. I am currently looking for a third artist.

Do you have to self-produce as an independent artist?

M.B: All the time. Even in French Ontario. It is a new experience for us: we have to rent a venue and sell our own tickets (and working with Brown Paper Tickets on that has been fantastic). It is a lot of work on top of working on your art, lyrics, music, and driving! We have to make sure that the media will talk about us, that the tickets have been sold, that the promotion has been made. But the potential for success is a lot more profitable for my company and my band. I have learned a lot from the dozen shows I have produced and I know I will have to do it again. Hopefully I can start delegating the admin part at some point because my main goal is to remain a singer.