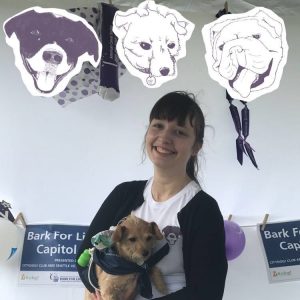 Brown Paper Tickets gives all employees 40 paid hours per year to volunteer for any non-profit organization that sings to their hearts. We call it Paid Time-On and it’s part of our Not-Just-for-Profit company core values. One of our most recent Paid Time-On adventures took place in the planning, production and day-of volunteering at Bark for Life.

Since October is Adopt a Shelter Dog Month, it’s the perfect time to get to know Bark for Life and Pawsitive Alliance.

Bark for Life is an American Cancer Society (ACS) fundraising event that takes place annually across the US. Bark for Life is a spin-off of the American Cancer Society’s signature event, Relay for Life. As Relay gained popularity, ACS staff, volunteers and cancer survivors noticed that dogs, who play a vital role in the rehabilitation, treatment and service of many cancer patients and survivors, often weren’t able to participate in Relay for Life.

In 2007, cancer survivor, JoAnn McKiernan, and her dog, Sassy, founded Bark for Life as a way to honor the contributions of our canine caregivers. More than just fundraisers, these events celebrate survivors, remember those we have lost, and those who are fighting – or in this case, barking – back. Bark for Life events now raise over $750,000 annually toward cancer research, patient services, education awareness, and advocacy.

Bark for Life in Seattle

A little over a year ago, the American Cancer Society decided to bring Bark for Life to Seattle. Being the dog-loving company we are, jumping in to help with planning and production was a no-brainer. Starting in January, we began coordinating a Paid Time-On volunteer project with the ACS to plan Capitol Hill’s very first Bark for Life.

Our volunteers worked in partnership with Pawsitive Alliance, a non-profit organization that aims to stop the killing of animals in Washington state by “increasing adoptions, supporting spay and neuter programs, and improving pet retention.” We spent months planning, securing sponsorship and prepping for the big day. There were plenty of dog puns involved, pawviously.

When Saturday, August 12 finally arrived, we gathered at Cal Anderson Park clad in our fashionable Bark for Life t-shirts designed by Seattle artist, Chris Hulsizer. We pitched our tents, rallied passersby, and cued up the music.

We had a fabulous morning filled with activities like a Best Trick contest, a raffle for an amazing gift basket donated by Wag N’ Wash and even a Pawject Runway canine fashion show. Owners dressed up their dogs in the latest fall fashions (or whatever they could get their dogs to wear for more than five seconds) and the dogs got to strut their stuff on the “dogwalk.”

One of our volunteers, Valerie Hedrick entered a surprise contestant—a balloon dog named Pop. In the end, a lovable 11-year-old pup named Mugsy won the hearts of our judges.

Why Not Me Pets Campaign

We also had the opportunity to hear more from our friends at Pawsitive Alliance about the #WhyNotMePets  campaign. The campaign gives attention to shelter animals waiting for a longer period of time on the adoption list. Find your furry friend for Adopt a Shelter Dog month.

In addition to our exciting activities, we had a doggy kissing booth, a photo booth with a custom Snapchat filter, and a craft booth for young puppers at the event.

We were also joined by two of our sponsors – Seattle Veterinary Associates and Serial Mysteries – who offered interesting information and entertainment to attendees.

Approximately 6 million dogs and 12.7 million people will be diagnosed with cancer this year. According to the National Cancer Institute, “The number of people living beyond a cancer diagnosis reached nearly 14.5 million in 2014 and is expected to rise to almost 19 million by 2024.” By engaging with organizations like the American Cancer Society, scientists can continue to do research to improve and develop new treatments to eventually bring an end to cancer. Thankfully, this research helps our canine companions as well.

Bark for Life of Capitol Hill raised over $2,000 this year to aid in the fight.