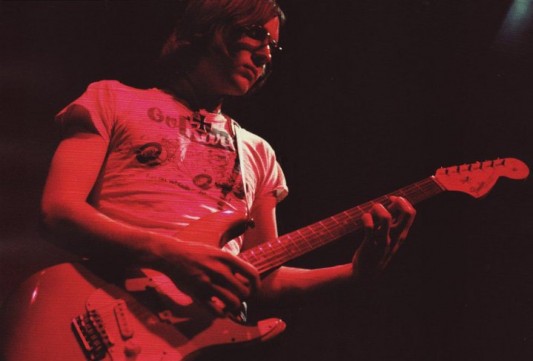 END_OF_DOCUMENT_TOKEN_TO_BE_REPLACED

Today, in 1910, a guitar legend was born in Liberchies, Pont-à-Celles, Belgium, to a family of Manouche gypsies. Though born with the first name Jean, he was given the nickname “Django” which means “I Awake” in the Romani language. Django Reinhardt was drawn to music at an early age and initially played the violin. At the age of twelve, he was given a banjo-guitar as a gift and quickly learned the instrument, mimicking the Roma musicians that surrounded him in the encampments outside of Paris. By thirteen, he was making a living as a musician and by eighteen, he’d made his first recordings, playing banjo.

That same year, the caravan that he shared with his first wife, caught fire. Returning home late from a performance, Django knocked over a candle on his way to bed. His wife made imitation paper flowers as a way to supplement their meagre income and as a result, their caravan was loaded with flammable materials. Django received first and second degree burns all over his body. His right leg was paralysed and the third and fourth fingers on his left hand were badly burned. Challenging doctor’s claims that he would never walk again, he refused to have one of his legs amputated and was walking with the aid of a cane within a year. END_OF_DOCUMENT_TOKEN_TO_BE_REPLACED

Metal Pioneers Diamond Head Tour the U.S. for the First Time in 35 Years!!

Heavy metal has gone through so many phases in it’s forty-year existence that just saying “heavy metal” isn’t enough to specify what you’re talking about; there’s thrash metal, speed metal, glam metal, industrial metal, death metal, black metal and so on. But, the first heavy metal sub-genre to gain popularity after the initial crop of bands (Deep Purple, Black Sabbath, Led Zeppelin and Judas Priest) was the New Wave of British Heavy Metal. The NWOBHM started in the late ’70s and the bands incorporated elements of punk (which was taking Britain by storm at the time) and played harder and faster than their predecessors, with less blues influences and a lyrical focus on mythology, occultism and fantasy. All this came together to create a tougher sound with crunching power chords and lightening-fast guitar solos.

Key bands of the New Wave of British Heavy Metal were Iron Maiden, Def Leppard, Saxon and Motorhead. Another key, but less recognized act in the movement was Diamond Head. While Diamond Head never achieved the level of success that was reached by some of their peers, they would prove to be a major influence on the thrash metal scene of the late 80’s. Metallica covered a number of their tunes and bands like Megadeth and Anthrax have both cited the band as a key influence in their sound. END_OF_DOCUMENT_TOKEN_TO_BE_REPLACED