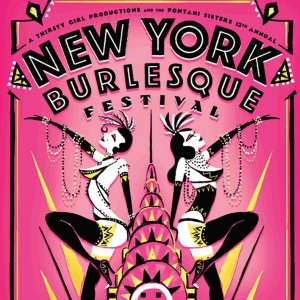 The glitterati is about to descend on the Big Apple in a flurry of sparkle, shimmies and smiles. The New York Burlesque Festival celebrates its 13th anniversary, September 24 to 27 with a fabulous line up of legends, queens, kings, international talent and burlesque up-and-comers. Since 2003, the festival has boasted sold-out crowds and this year is shaping up to be another big one.

Founded by Jen Gapay of Thirsty Girl Productions and bonafide burlesque superstar Angie Pontani and featuring over 100 international burlesque and variety performers, it is one of the largest burlesque festivals in the world.

“The festival is an amazing and totally unique opportunity to see some of the best burlesque entertainers from around the world, right here in NYC.” says Angie Pontani. “Not only can audience members take in five amazing shows, they can shop, take classes and mingle with our amazing cast of stars. This festival gives a tantalizing taste of all the different styles and genres of performance within burlesque.”

All burlesque fans will love this luscious and star-studded line up: Dirty Martini, Midnite Martini who won Miss Exotic World 2014. Burlesque legend Judith Stein, boylesque legend Tigger!, founder of the legendary New York School of Burlesque, Jo “Boobs” Weldon, 2012’s Mr. Exotic World Russell Bruner, as well as Mr. Gorgeous, 2014 “Best Boylesque” winner at the Burlesque Hall of Fame. And this is just a tantalizing tidbit of what New York audiences will be treated to.

Brown Paper Tickets is proud to offer 4-day VIP passes for the festival. Get your tickets now.

Brown Paper Tickets is hosting two free gatherings in New York at the same time as the festival and I’ll be at both. Come out Thursday, September 24 to meet our local NYC crew and soak up event ideas, suggestions, insights on how to best ticket and promote your events. It’s at Haylards in Brooklyn, just around the corner from the festival’s opening night venue. More details.

We would love to see our burlesque friends at Brown Paper Tickets burlesque happy hour (Sept. 27) at the Tippler during the New York Festival Burlesque Bazaar. Cocktails and conversation will be flowing. Mingle with burlesque performers, luminaries and event organizers. Enter our drawing for event tickets. RSVP now. 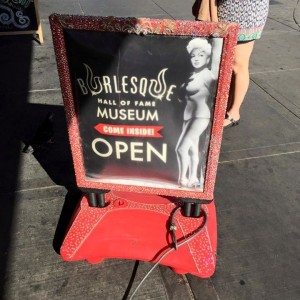 Brown Paper Tickets is proud to have handled ticketing for the Burlesque Hall of Fame Weekender, the annual gathering of the glitter tribe in Las Vegas, June 4 to 7. This was my first year attending the Weekender and it was a fantastic opportunity to meet many of our burlesque producers and performers in person.

Sunday night’s co-host Ernie Von Schmaltz dubbed the event “summer camp for sexy weirdos.” That’s definitely a fitting description. But to me it’s more of a big, glittery family reunion as I get to catch up with performers I’ve worked with or have seen perform.

Early burlesque performers were often outcasts from mainstream society and even mistreated by family members. One shared a story of how, in the early 1960s, her religious mother made her burn all her burlesque costumery. She obeyed. Years later, while looking through her grandmothers’ attic, her daughter found the one dress that wasn’t lost. She performed her routine for the showcase in that dress and there wasn’t a dry eye in the house (including mine).

These ladies live loud and age isn’t slowing them down. It must feel so empowering for the performers, now in their 70s, 80s or even 90s (the oldest dancer was 93) to be celebrated and looked at as role models. Our charming, graceful host, The World Famous BOB summed it up. “These women are redefining what it means to age as a woman in our society.”

Saturday night’s show was the 25th Annual Tournament of Tease hosted by fellow Seattleite and old friend Armitage Shanks, the Carny Preacher. At five hours long, it was a marathon of a performance, but as a testament to the quality, it didn’t seem long.

And the Winners Are…

Keep your eyes out for the best of burlesque, performing around the world. They’re well worth your time.

And, finally, the Reigning Queen of Burlesque, the winner of Miss Exotic World 2015 is:
Trixie Little – New York, New York.

Trixie killed it in her banana dress. She has been a large presence in the burlesque scene since 2002, when she debuted as part of the award-winning acrobatic burlesque superduo Trixie Little & The Evil Hate Monkey. Since then she’s performed with John Waters & The Flaming Lips and was featured on season 4 of “America’s Got Talent.” Not only that, she’s been a mentor and inspiration for many within the community. Way to go Trixie.

Meanwhile, at the Pool … 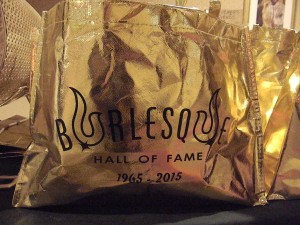 I was able to duck into Sunday’s pool party for a bit and enjoyed the killer tunes being spun by Gigi & Pop (New York, New York) while taking in the poolside fashions of the glitterati. Good times.

Sunday night’s show was the Icons & All-Stars showcase hosted by Ernie Von Schmaltz and Victoria Deville. This show featured past winners of BHoF’s past as well as the presentation of the Sassy Lassy Awards to burlesque pioneers.

The Sassy Lassy was the name of the bar that legendary tassel twirler, Jennie Lee and her husband owned in California. Lee was a veteran of the 1950’s burlesque scene, known for inviting all her burlesque friends around for impromptu performances. Purportedly, one morning after picking up stripper refuse from a wild night with her friends, she started nailing bras, gowns, pasties and g-strings to the wall, creating the Burlesque Hall of Fame Museum’s first home. The first BHoF gathering took place in that same bar in 1965, creating the tradition that celebrated its 50th anniversary with this year’s Weekender.

Making this Weekender extra special, Dustin Wax, Burlesque Hall of Fame President announced that they will open the museum in a new space in downtown Vegas, expanding their square footage by 20 times and allowing them to (finally) put their large collection on display. From a dive bar in San Pedro to a legitimate museum in Las Vegas, BHoF’s come a long way, baby.

For more detailed coverage of the weekend, visit Burlesque Beat and 21st Century Burlesque. If you’re a burlesque event organizer or performer who wants to support the Burlesque Hall of Fame, check out our Burlesque Hall of Fame Fund, which allows you to add an additional fee to your ticket price, 100% of which goes directly to the nonprofit museum. Or donate directly.

That’s a wrap. Can’t wait until next year’s Weekender.