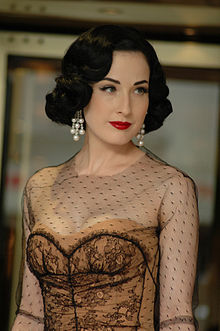 Today is neo-burlesque icon Dita Von Teese‘s birthday. A prominent figure in the neo-burlesque movement since the early 90s, Von Teese, is in no small part responsible for the burlesque revival that continues to this day. Inspired by the films and musicals of the 30s and 40s, Von Teese helped define the performance style and aesthetic that has become de riguer with modern burlesque performers. Von Teese’s look is inspired by classic cinema and retro style, particularly elaborate lingerie such as basques, corsets and stockings, and her live shows often feature props such as a giant powder compact and a giant martini glass. She’s also known for a fan dance which features the world’s largest feather fans. Von Teese has been featured in Playboy, Vanity Fair, Vogue and Elle and has also recently designed a new lingerie range with Wonderbra (see video below).

While Von Teese is the public face of the neo-burlesque movement, there are girls (and guys!) all over the country that are taking what Von Teese popularized and adding their own, unique twists and shimmies. Brown Paper Tickets has long been a supporter of the burlesque movement and we ticket hundreds, possibly even thousands, of burlesque events year round. END_OF_DOCUMENT_TOKEN_TO_BE_REPLACED