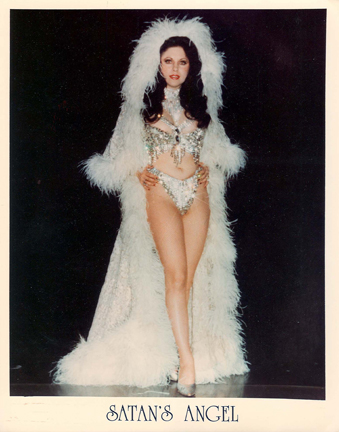 Satan’s Angel was born Angel Cecelia Helene Walker on September 18, 1944 in San Francisco, California. She began dancing burlesque after winning an amateur strip contest at the North Beach nightclub Moulin Rouge in 1961. Her signature move was setting her tassels on fire, “then extinguishing the flames by means of strenuous mammary rotation.” She performed in San Francisco throughout the 60s at clubs like the Esquire and the Condor Club and even played bass in The Hummingbirds, an all-girl topless cover band that performed at Tipsy’s nightclub in North Beach. From the 1970s and into the 80s, she performed in Vegas, working with legendary burlesque promoters Barry Ashton and Harold Minsky and performing at clubs like the Palomino Club, the Silver Slipper and the Minsky. END_OF_DOCUMENT_TOKEN_TO_BE_REPLACED