I know, I know. When you hear March Madness, you usually thinks of basketball but judging by the sheer number of roller derby events we got going on just in the first few weeks of March, I think that’s going to change. There’s derby bouts going on everywhere. You’d be hard pressed to find a corner of the country that doesn’t have a bout happening.

We are, of course, so proud to be part of the national roller derby movement and encourage everyone to go out and support this grass-roots, DIY sport that’s on the rise. Look for another list towards the end of the month featuring more derby madness!

Roll on guys and gals, roll on!

Demolition City Roller Derby: The Good, The Bad, and The Ugly – Evansville, Indiana To paraphrase Clint Eastwood, in the roller derby world, there are two kinds of people: those who hit, and those who get hit! The hits will be good, bad and ugly at the Veteran’s Memorial Coliseum in Evansville, as the rollergirls from Demolition City Roller Derby host arch-rival Black-n-Bluegrass in a wild derby showdown.

Moonshine Massacre – Redding, California Join the Redding Rollergirls as they bout against the Golden State Rollergirls for this high action Roller Derby event!

Roller Derby Bout – Stockton, California Over five years of hard work has paid off for the Port City Roller Girls, Stockton’s only Roller Derby league as they are into their 6th Season. They are ready to share with their community what they have learned from long hours of practice and some painful bruises as they take to the track to play an intense, fast-paced sport against other women’s athletic organizations. PCRG is owned and operated by the skaters, for the skaters. It is the motto of the flat track roller derby revival that’s been sweeping the country over the past several years. In this bout,the Port City Roller Girls will face off against South Coast Roller Derby.

LA Ri-ettes vs. New York Gotham Girls – Los Angeles, California Are you ready for some All Women’s Bank Track Roller Derby action? Then purchase your tickets now before they sell out to see the LA Ri-ettes take on Gotham Girls Roller Derby from New York. At the LA Derby Dolls – Doll Factory located in LA’s Historic Filipino Town. Trey Sandusky will be singing the national anthem. ATTALOSS will be performing at half-time in the Vendor Village.

Roller Derby Across the Country (and in Puerto Rico) This Weekend! 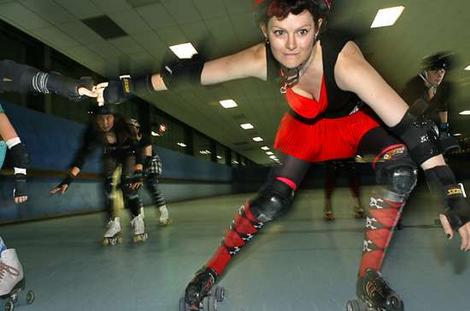 Everyone out there probably  knows how much we love Roller Derby and the incredible community surrounding it. Over the last decade we’ve watched this sport grow from scrappy DIY beginnings to filling arenas across the country and we can’t be more proud to be such an integral part of the derby family. As part of this community we feel it’s our duty to get the word out about derby events and to encourage all our customers to support this incredible sport and all those involved in it. So, here’s my list of derby events happening in the next couple weeks. There’s even the first Roller Derby bout in Puerto Rico! Get out there and support your local derby teams! Tell ’em BPT sent you.

2011 Fall Down Mix Up – Castle Rock, Colorado  60 skaters, from leagues across Colorado coming together for this night of Mixed up derby fun. Kids 12 & under are always free. Don’t miss the after party at “Jerry Street Grill & Bar” where you can meet and mingle with your favorite derby girls! END_OF_DOCUMENT_TOKEN_TO_BE_REPLACED