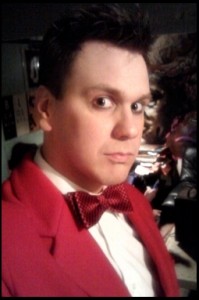 In this special, two-part series, James Ulness, Brown Paper Tickets Client Services Representative and an avid, enthusiastic member of the Seattle burlesque community, prepares to make his début as a boylesque performer. James has been a regular presence backstage at local burlesque shows for years but last Saturday was his first foray onto the stage. In the first part of the series, James talked about his decision to perform and his process in preparing for his act. In this, the second part of the series, James shares his thoughts and feelings on the actual night of his boylesque debut and announces his NEXT performance! Enjoy.

My boylesque début has come and gone. Just a short while ago I was surrounded by the chaos of the show. The cold air backstage, thick with glitter and the sounds of performers rushing about. My small corner of the world enveloped in a cloud of noise and excitement. But, now life is still, quiet and average. I can already feel the itch to get back on stage. To dive into another maelstrom and be tossed about like a ship cursed by an angry Poseidon. However, now it’s time to do reflect back onto the past couple of days and review what I did and what I learned.

How did it feel being on stage for the first time?

Amazing! A mix of fear and excitement. I hardly remember the act itself, only that it went off almost exactly the way I rehearsed it and the euphoria of coming off the stage after. It’s hard to come up with specific details, everything is a bit of a blur but, judging from the audience’s applause, I didn’t make a complete fool out of myself. Or maybe I did. Either way, they seemed to enjoy my performance. One thing that surprised me was my lack of nervousness before going on stage. I was not expecting to be relaxed backstage but as I stood in the wings, waiting for the MC to announce me, there wasn’t an ounce of hesitation in my body. I had rehearsed the act until I knew every beat of the song. I new every mark I needed to hit. Nothing was left to chance. I was on auto pilot as soon as I stepped onto the stage and it felt like home. END_OF_DOCUMENT_TOKEN_TO_BE_REPLACED